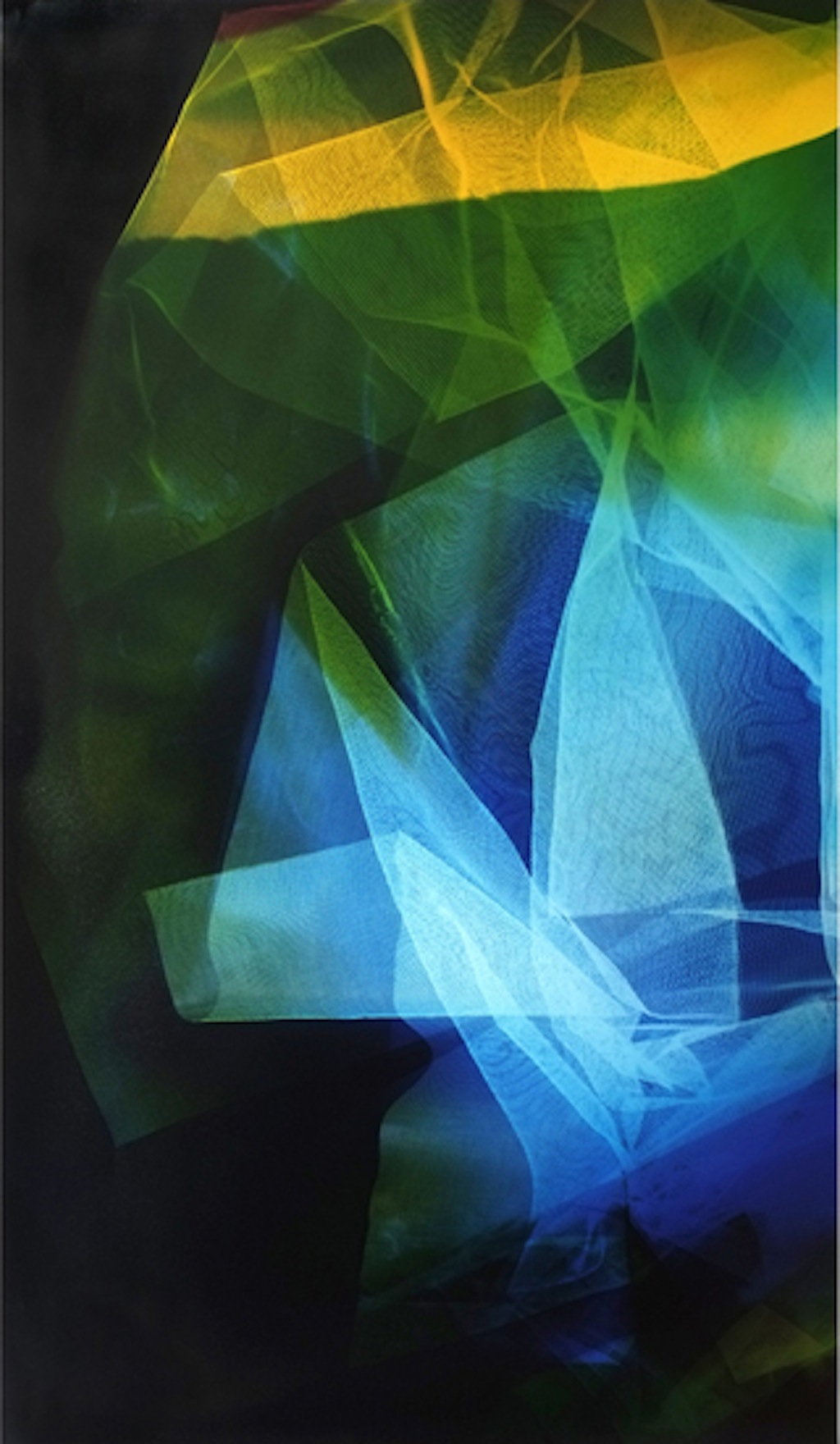 Yancey Richardson is pleased to present Prismatic Tracks, the fourth solo exhibition at the gallery by American artist Bryan Graf. As with his previous exhibitions – Wildlife Analysis, Field Recordings and Broken Lattice – Graf’s new works explore the tensions between control and chance. All of the works in Prismatic Tracks were produced as unique, camera-less photograms, a process by which the artist can exert certain constraints while purposefully leaving other elements beyond his control. Throughout the body of work, Graf employs mesh as a metaphor for structure, order, and systems, and light as a variable element. As Graf describes:

“A track is a recording. A track is a path made by physical activity. Prismatic Tracks is an optical research into kinetic photograms made with light, mesh screen & photosensitive paper. Perspective is everything. Light is exposed onto the paper from various angles, with multiple colors, to create these images. Paths of light cross one another on the sheet of paper - being filtered, refracted, warped and bent as they travel through the screens onto paper. Multiple paths are made and the light generates new forms as the exposures of light from various angles blend together.

These prints are the results of physically moving around a sheet of light sensitive paper with a flash at different angles, primary-colored filters stuffed in my pockets, and folding mesh screen to generate the forms on paper. This work has nothing to do with abstraction or the preconditioned and specious history of an abstract movement. It has everything to do with being obsessed and consumed with light and the primal and necessary manifestations it conjures in our imaginations.”

Graf’s continued rigorous investigation of photographic materiality has here yielded his largest, most visually dynamic works to date, some measuring almost 7 by 4 feet in scale. Large areas of deeply saturated color highlight every fold of translucent mesh, splayed in all directions of disorienting spatial depths, occasionally blurring into a brilliant foregrounded white, where multiple filtered exposures have come together. The performative action of filtering light illuminates the artist’s gesture, such that forms within each of the scroll-like compositions reappear or are subtly reiterated throughout the exhibition.

Bryan Graf (b. 1982) lives and works in Portland, Maine. He received an M.F.A from Yale University in 2008 and a B.F.A. from the Art Institute of Boston in 2005. His first solo museum show, Moving Across the Interior, was on view at the ICA@MECA in Portland, Maine through April 2014. Graf’s work has recently featured in Second Nature: Abstract Photography Then and Now at the Decordova Sculpture Park and Museum, and The Polaroid Years: Instant Photography and Experimentation at the Loeb Art Center at Vassar College. Graf’s work has appeared in numerous publications, including Blind Spot and The New York Times. He is the subject of three monographs: Wildlife Analysis (Conveyor, 2013), Moving Across the Interior (ICA@MECA, 2014), and Prismatic Tracks (Conveyor, 2014).