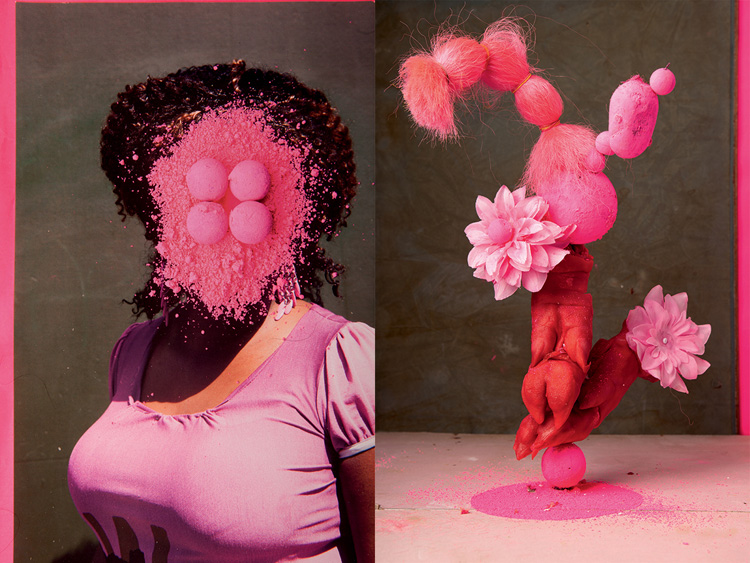 Yossi Milo Gallery is pleased to announce Dalston Anatomy, an exhibition of color photographs and sculptures by Italian artist Lorenzo Vitturi. The exhibition will open on Thursday, November 6 and close on Saturday, December 13, with an opening reception for the artist on Thursday, November 6 from 6:00 - 8:00 pm. This is Vitturi's first solo exhibition in the United States.
Dalston Anatomy is a visual document and investigation of Dalston's Ridley Road Market, located in East London. This colorful market is known for its variety of goods, with vendors offering theatrical wigs, exotic fruits and vegetables, and a wide array of fabrics from Africa and India. Noting the transient nature of the market and the rapidly changing neighborhood, Vitturi's series strives to honor and preserve this vibrant, multicultural environment.
As a resident of Dalston, Vitturi became fascinated with the daily rhythm of the market and began creating makeshift sculptures from a variety of discarded materials found at the market, from bits of fruit and pigs' feet to balloons and soap. Often, these found objects are left in the artist's studio to rot or are covered with pigment powder, mimicking the organic and kaleidoscopic nature of the market. Vitturi then arranges the materials, often precariously, in front of constructed backdrops and photographs the structure before it falls. Street photographs, including portraits of vendors and visitors to the market and still lifes of the stalls, accompany these staged images. The artist reworks the surface of particular photographs by adding layers of pure color or attaching found objects. These collages are then rephotographed and paired with complementary images of sculptures or still lives.
The exhibition will feature photographs, sculptures and site-specific arrangements of objects installed to reflect the raw and improvised nature of Vitturi's studio practice. Drawing on his experience as a set designer for film, the artist's photographs may be pinned directly to walls, printed on bamboo paper and mounted on wood or placed in sculptural vignettes incorporating materials directly transplanted from the market stalls.
Lorenzo Vitturi graduated from the Istituto Europeo di Design in Rome with a Master's in Photography and Design. A solo exhibition of Dalston Anatomy is on view at The Photographers' Gallery in London from August 1 - October 19, 2014 and was presented at FOAM, Amsterdam in 2013. A monograph of Dalston Anatomy was published in 2013 by SPBH Editions, which received the 2014 Photography Grand Prix at the Hyères International Festival of Fashion and Photography. The book was shortlisted for both Aperture's First PhotoBook Award and MACK's First Book Award, and was named as one of the best photobooks of 2013 by The New York Times, The Guardian, Martin Parr and Erik Kessels, among others. Vitturi was born in Venice, Italy in 1980 and currently lives and works in London and Milan.