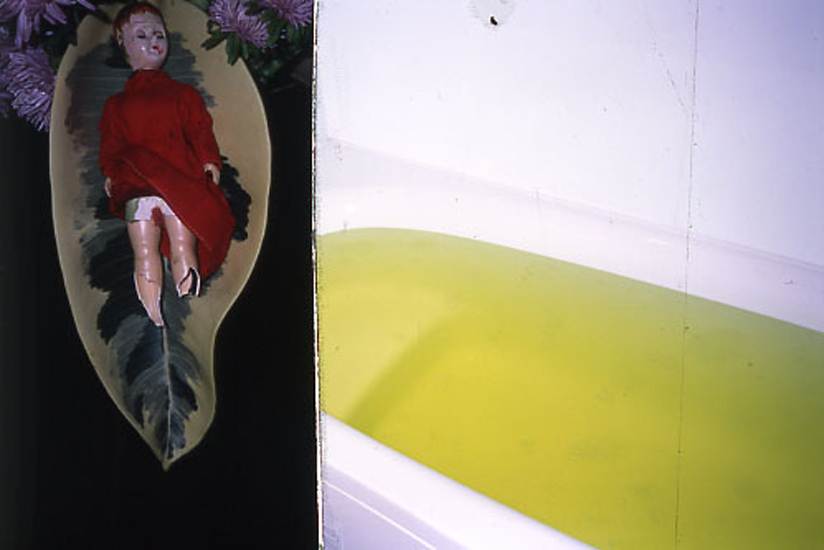 Rat Hole Gallery is pleased to present an exhibition of new work by Nobuyoshi Araki on view from September 26 until November 2, 2014. The exhibition, which marks Araki’s ninth solo show at Rat Hole Gallery, will present roughly 30 photographs from his latest series entitled Kirishin.

Kirishin, when written in Japanese as 切真 is composed of the character kiru meaning “to cut” (also used in the Japanese word for “sentimental”- a key theme found in many of Araki’s works-) and the character meaning “the truth” (also used in the Japanese word shashin meaning photography). As the title suggests, the photographs in this series have been printed from slide films that have been cut in half and pasted together by the artist, who was recently diagnosed with a retinal artery occlusion that has caused a loss of vision in his right eye. With subjects ranging from his daily life and the urban landscape of Tokyo to nude portraits, flowers, and dolls, the resulting images express Araki’s “torn” emotional state as well as narrate various stories through the act of cutting.

Following the series Aisetsu created from Polaroids that have been cut and pasted together, and Sagan no Koi (Love on the Left Eye) series of photographs printed from film that has been colored on right side with a black magic marker, Kirishin is Araki’s latest series to emerge from work based on “destruction” and “reconstruction” as well as the artist’s view on life and death. “Photography is just like life,” explains Araki, who gives birth to new discoveries and realities through a unique and unexpected synthesis of images in Kirishin. Not only is the title a clever play on words characteristic of the artist, but the photographs in the exhibition also express Araki’s playful sense of humor and his unrelenting thirst for life.