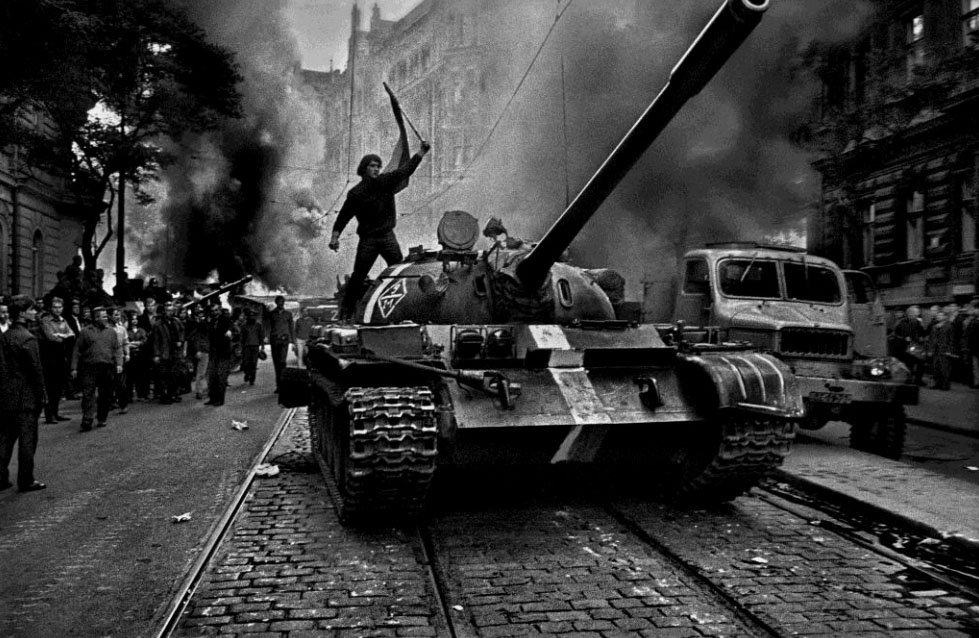 Revered for his enigmatic images of Roma communities and his dramatic documentation of the 1968 invasion of Prague, legendary photographer Josef Koudelka (Czech, naturalized French, b. 1938) has generated some of the most iconic and riveting photographs of the last fifty years. Josef Koudelka: Nationality Doubtful, on view November 11, 2014–March 22, 2015 at the J. Paul Getty Museum, Getty Center, is the first retrospective of his work in the United States that traces the photographer’s prolific career over the last five decades.
Drawn largely from Koudelka’s personal archive, this exhibition includes rare prints used to create the 1975 publication Gypsies, maquettes that aided the preparation of the books Gypsies (1975) and Wall (2013), and vintage photographs that Koudelka sold for the hard currency he needed to flee Prague and enter exile in 1970. The exhibition originated from the Art Institute of Chicago, and is co-organized with the J. Paul Getty Museum. The exhibition will also travel to Fundación MAPFRE, Madrid in 2015.
“Josef Koudelka is a figure as enigmatic as his subjects, and his dramatic life story adds further dimension to his long career and substantial body of work,” says Timothy Potts, director of the J. Paul Getty Museum. “As we approach the 25th anniversary of the Czech Republic’s Velvet Revolution, Josef’s work serves as a reminder of the human face of conflict and the unique power of photographs to capture the raw experience of deterioration and renewal.”
An aeronautical engineer by training, Koudelka was swept up in the open-minded youth culture that emerged in Czechoslovakia following the death of Soviet leader Josef Stalin in 1953, which was followed by two decades of brutal repression. He began photographing seriously in 1958, starting with scenes taken in Prague, then on trips abroad that foreshadow his impulse to work as an itinerant, independent photographer for over forty years. Throughout the 1960s, Koudelka was employed by the leading Czech theater companies Divadlo za branou (Theater behind the Gate) and Divadlo na zábradlí (Theater on the Balustrade); his images from this period frequently graced the covers of Divadlo (Theater) magazine, several issues of which will be on view in the exhibition. 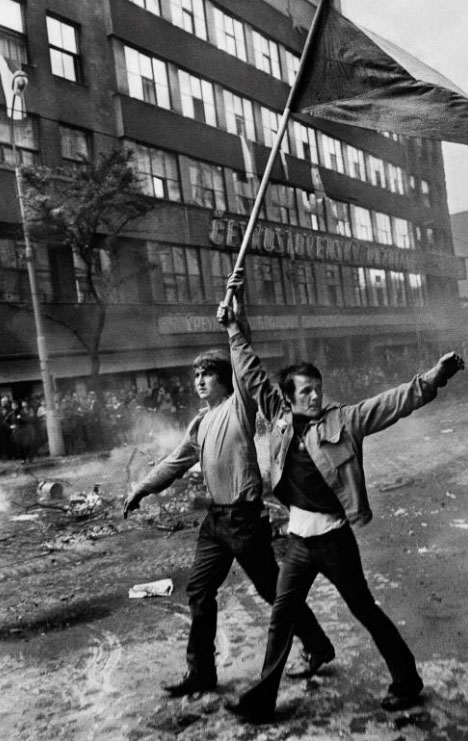 In 1961, Koudelka began to spend considerable time in Roma, or Gypsy, encampments and villages in Eastern Europe. While initially a sideline activity, his photographs of these communities soon yielded an impressive body of work that became a life-defining project. Between 1963 and 1970 he visited over eighty locations in Slovakia, Romania, and the historic Czech lands of Moravia and Bohemia, immersing himself in the lives, festivities, and music of Roma culture. While maintaining unity through his vision, Koudelka gave his subjects room to articulate themselves as he photographed them. Twenty-two surviving prints from the internationally celebrated 1967 exhibition of Gypsies are displayed as a group, as they would have been nearly fifty years ago.
In August 1968, Koudelka woke to find Soviet-led Warsaw Pact armies invading Prague. He immediately took to the streets, ceaselessly documenting the devastating occupation for a week, clambering onto tanks and stumbling with protestors into machine gun-toting soldiers. His images came to represent the conflict as well as the spirit of the resistance movement. The rolls of film he used to record the struggle in Prague were eventually smuggled to the West, and Koudelka’s images were disseminated in newspapers and magazines around the world. Out of fear of reprisals for Koudelka and his family, the photographs were credited anonymously as “P.P.,” or “Prague Photographer” until 1984.
Koudelka left Czechoslovakia in 1970 and sought asylum in the United Kingdom. While in exile, he continued to work, traveling across Europe in a circuitous route dictated by the timing of Roma events and religious and folk festivals that recurred each year. The alienation he endured while stateless emerged in the resulting body of work Exiles, which features symbols of estrangement---stray animals, solitary figures, disregarded objects, and displaced Roma—that are grounded in Koudelka’s daily experiences as an exile. The title of the exhibition, Josef Koudelka: Nationality Doubtful, derives from the legal status recorded in Koudelka’s travel documents whenever he returned to the United Kingdom—his de facto hub for the first decade of exile—because he could not produce his Czech passport or prove his birthplace.
Since 1986, Koudelka has been making photographs with panoramic cameras. He utilizes this expansive format to showcase terrains that have been mined, stripped, exploited, or scarred by industry; devastated by conflict; or altered by time. These images form the backbone of his impressive accordion-style publications, such as The Black Triangle and Chaos, which present landscapes on the verge of ruin. More recently, Koudelka has utilized this panoramic format to document the West Bank barrier and land that surrounds it. Featuring locations as varied as the West Bank, the Negev desert, and the Golan Heights, Koudelka’s Wall compels viewers to look at the desolation of a vast landscape dominated by walls, fences, checkpoints, access roads, and barriers. A selection of prints from Wall, as well as a limited edition book published this year, will be on view.
Josef Koudelka: Nationality Doubtful is on view in the Center for Photographs at the Getty Center November 11, 2014– March 22, 2015. The exhibition is co-curated by Amanda Maddox, assistant curator, department of photographs, the J. Paul Getty Museum, and Matthew Witkovsky, Richard and Ellen Sandor Chair and curator, department of photography, the Art Institute of Chicago. An accompanying exhibition catalogue has been published by the Art Institute of Chicago and distributed by Yale University Press.
Josef Koudelka is a member of Magnum Photos.