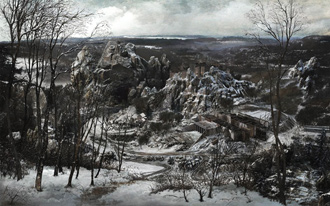 Artists of the gallery: - Allan Sekula - Bernhard Rüdiger - Fabian Hesse - Fabien Verschaere - Jan Davidoff - Jean-Pierre Bertrand - Jens Semjan - Jordi Colomer - Orlan - Pierre Coulibeuf - Robert Stadler - Ryuta Amae - Stefan Nikolaev - Yuri Leiderman Galerie Traversée is delighted to be the first to present work by Ryuta Amae in Germany. Ryuta Amae's pictures on a grand scale in large formats spirit the viewer away to enigmatic places that are both fascinating and spectral. Viewed from an elevated point of station, a panorama of mountains and valleys, fissured rock formations and savage vegetation opens up. Water cascades powerfully from cliffs to pour into lakes and rivers which are subsequently lost in densely wooded regions. Once in the plain, the streams make their way, leaving tracks through meadows, creating shallow ponds and islets. This seems to be virgin pristine landscape, depopulated and devoid of human habitation, a landscape that invariably keeps the viewer at a distance. The handling of light and palette in these pictures creates a dream-like, unreal atmosphere yet the scenery does not really seem defamiliarized. Yearnings for a renewed encounter with an existenstial experience of nature coax viewers to learn the name of that land so they can embark at once on a voyage to it. They will not get far, however, since Amae confronts us with adroit re-construction of deceptively genuine-looking landscape vistas which arise exclusviely in his memory and imagination. Using 3D computer graphics programmes of the type used to make video games, Amae generates prefab re-usable elements of a collective visual memory, as it were, a primal image of our idea of nature. Deploying intricate detail, the density and formal urgency of virtual painting, which he presents laconically as photography, he brings off a balancing act between fiction and reality. Amae tests the dependability of our perceptions as well as our notions of living authentic lives. A disturbing situation thus arises between actual absence and virtual presence, between imagination and documentation of space and time. Pantheistic ideas are suggested and so are concepts of emptiness and ideals of perfect beauty. Born in Oiso, Japan, in 1967, the artist was awarded the Altadis Arts Plastiques prize in 2002. His work has hitherto been shown in France, Italy, England and Japan. Mon but n'est pas de dénoncer le monde, mais de le montrer. [My goal is to show the world rather than decry it.]. (Ryuta Amae 2001) Text: Julia Lachenmann, English translation: Joan Clough