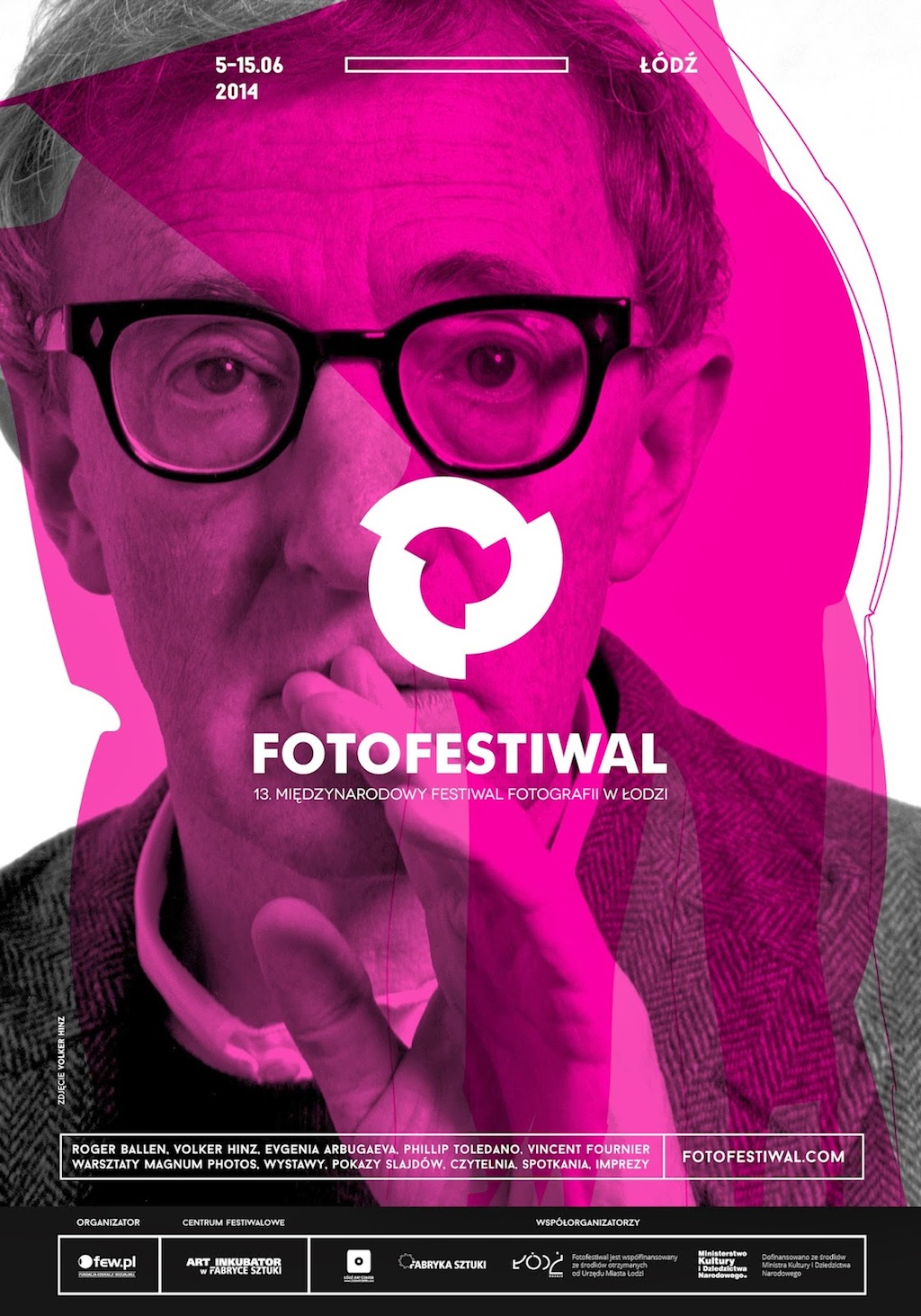 13th edition of Fotofestiwal will take place on June 5-15, 2014 in Łódź, as ever. This time the festival returns to the venue in which 10 earlier editions took place. Main exhibitions and events will be housed at Art_Inkubator in Fabryka Sztuki (Art Factory), three post-industrial buildings which have been modernized and transformed into an impressive, high-tech place within the last 3 years. The programme of this year Fotofestiwal is afoot, but we will disclose a few details right now.
Future Photo Show is a discussion panel devoted to the theme of future, combined with Q&A with authors. The guests will be visionary artists, who create images of the future. We have invited three photographers: Phillip Toledano, Vincent Fournier and Kobas Laksa.


As part of the Special Exhibitions section we will show two extensive, retrospective exhibitions: disquieting, sombre Roger Ballen, one of the most widely exhibited photographers in the world at the moment, and Volker Hinz, photographer of major personalities of the 20th century history and showbiz. Aside from that, we will present a project by the Russian artist, Evgenia Arbugaeva, which received multiple awards and which tells a fairy-tale story of the artist’s childhood in faraway Siberia.
Amongst the finalists selected from over 600 submissions to the Grand Prix Fotofestiwal 2014 there are, i.a.: Elena Chernyshova, awarded at this year World Press Photo contest for her photographs of Norilsk, one of the most polluted cities in the world, and Adam Lach, whose Stigma project received an honourable mention at the prestigious American contest Pictures of the Year International 2014. All in all 10 finalists will participate in the contest exhibition, one of which will be awarded with the Grand Prix of 10 000 PLN.


The following artists will also present their work at this year Fotofestiwal: Kuba Dąbrowski, Igor Omulecki, Anita Andrzejewska, Jakub Karwowski. Aside from the photography exhibitions there will also be a display of publications devoted to photography entitled The Best Photobooks of the Year 2014.
Together with the legendary Magnum Photos Agency we would like to invite you to two events: Masterclass – exclusive 4-day long master workshops with Rebecca Norris Webb and Alex Webb, one of the top photographers of the Agency, and Professional Practice – meetings and portfolio review with experts collaborating with the Agency on the subject of finding one’s way in the contemporary market of world photography.
The programme will also include: workshops, meetings with authors, contests, photography auction, late night slide shows, reading room and, obviously, clubbing in Łódź.


EXHIBITIONS
In the exhibitions programme: Grand Prix Fotofestiwal 2014, special exhibitions and accompanying exhibitions.
Roger Ballen is the author of disturbing, haunting images. His black and white photos depict sombre spaces, bizarre props, individuals with unusual facial features, mystical compositions. He is one of the most widely exhibited photographers in the world these days. Following famous MoMa in New York and Centre Georges Pompidou in Paris, Ballen’s work will be presented at the Fotofestiwal in the Atlas Sztuki (Art Atlas) gallery in Łódź. It will be the first retrospective exhibition of the artist in Poland.


Photos of Volker Hinz will be yet another rarity, available for viewing only at exhibitions and in print – the artist consistently avoids virtual media, refusing permission to create a webpage devoted to his work. Photos of Clint Eastwood, Madonna, Woody Allen, Pierre Cardin and many others were taken to order from the most prestigious magazines. His works defined the style of the cult magazine Stern for over 40 years. The exhibition will comprise over 100 photos of Volker Hinz.


Evgenia Arbugaeva, winner of the Leica Oskar Barnack Award 2013, will tell a story of her fairy-tale childhood in faraway Siberia, where “the snow is so white, the sky is so white, the wind is so strong that you virtually can drift in the air, as if you were floating in space”. Arbugaeva has made one of the most interesting photographic debuts in the recent years. The project, which received multiple awards, will come to Poland owing to the Leica Gallery in Warsaw.


At the Grand Prix Fotofestiwal 2014 exhibition we will see photography projects of 10 finalists selected out of over 600 submissions from all over the world. Amongst the finalists there is, i.a., Elena Chernyshova, awarded at this year World Press Photo, with her photographs of Norilsk, one of the most polluted cities in the world (Days of Night – Nights of Day). This year two Poles were selected by the jury: Agnieszka Rayss with her project on the intimate quarters of a city entitled No Man’s Land, and Adam Lach who will tell us about a 60 people strong Romanian Romani family residing on an encampment in Wrocław. The Stigma project by Lach was published in the New York Times and received Picture of the Year Award 2014. The contest exhibition will present 10 finalists; only one of them will receive the Grand Prix of 10 000 PLN.


The festival programme will also feature an exhibition of the Best Photobooks of the Year 2014 contest, at which we will present books on photography awarded at the contest – albums, catalogues, theory books, textbooks as well as limited self-publishing editions and zines. The submission deadline is April 30, 2014. More on the webpage Fotograficzna Publikacja Roku 2014 (The Best Photobooks of the Year 2014). 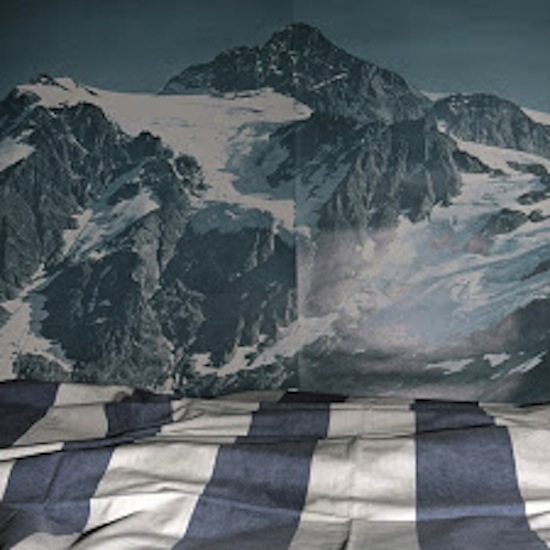 EVENTS
In the programme:
Magnum Photos Masterclass – exclusive 4-day long master workshops with Alex Webb, one of the top photographers from the Agency. The workshops will take place on June 1-4 and are aimed at both professional photographers and advanced amateurs. More info on the webpage…


Professional Practice – yet another Magnum Photos offer for photographers: meetings as well as portfolio reviews with experts collaborating with the Magnum Agency. The meetings’ topic will be contemporary world photography market, conscious work on one’s career and managing one’s professional development. The workshops will take place on June 6 and 7. More info on the webpage…


Future Photo Show – discussion panel and meetings with authors, devoted to the subject of future, during which we will encounter visionary artists. We are taught that a camera records the present and allows us to instantaneously turn the present into the past. “Cameras (…) render an immediate reverse view of our experiences” Susan Sontag wrote. How can we then talk about the future by means of photography? Is photography capable of creating visions of the future, or perhaps its purpose is to tell stories of the past and leave a trace of the present? Is there room for visionary photographers? What aspects of the future are of interest to artists and what means do they use to talk about it? The participants of the meeting are: Phillip Toledano, Vincent Founier and Kobas Laksa.


The Best Photobook of the Year 2014 – we await books on photography until April 30: albums, catalogues, theory books, textbooks as well as limited self-publishing editions and zines. We will award publications which have potential to inspire, which present bold concepts, polished graphic design, impeccable print, exceptional photographs and a well-thought-out project. The jury consists of invited experts who engage in producing books and in photography. Awarded books and albums will be displayed at the exhibition during Fotofestiwal. More info on: http://fotofestiwal.com/2014/wydarzenia/fotograficzna-publikacja-roku-2014.
Photography Auction – on sale works of circa 60 photographers who deal with the theme of body in Polish photography, as well as works of our special guests: Roger Ballen and Volker Hinz. The Auction is organized by Fotografia Kolekcjonerska and will be preceded by the pre-auction exhibition at the Leica Gallery in Warsaw (May 30 – June 3) and in Art_Inkubator (from June 6).
Also: workshops, meetings with authors, late night slide shows, parties. Details coming soon!


Following MoMa in New York and Centre Pompidou in Paris, Roger Ballen’s work is coming to Łódź. Volker Hinz will present his photographs of major show business and politics personalities of the 20th century. Photography workshop will be led by the top member of the legendary Magnum Photos Agency – Alex Webb. Between June 5-15: 13th edition of the International Festival of Photography in Łódź.
For years now Fotofestiwal has focused on bringing world-class photography to Poland. Roger Ballen is the author of some of the most disquieting images in the history of photography. It will be the first extensive exhibition of his work in Poland. Atlas Sztuki (Art Atlas) gallery will be the host of Ballen’s exhibition. Yet another rarity will be photography of Volker Hinz. His photos of Clint Eastwood, Madonna, Woody Allen, Pierre Cardin and were taken to order from most prestigious magazines, and Hinz himself defined the style of the German magazine Stern for over 40 years with his photographs of the USA and south of Africa. The exhibition will comprise over 70 photos, 4 of which will end up at the photography auction. Pre-auction exhibition will be available for viewing in Warsaw, and afterwards at the new festival centre: the post-industrial Art_Inkubator.


Discussion panels and meetings with authors at the 13th edition of Fotofestiwal will be devoted to the topic of FUTURE. We are taught that a camera has been designed to record the present, to allow us to instantaneously turn the present into the past. “Cameras render an immediate reverse view of our experiences” Susan Sontag wrote. How can we then talk about the future by means of photography? Is photography capable of creating visions of the future, or perhaps its purpose is to tell stories of the past and leave a trace of the present? Is there room for visionary photographers? During FUTURE PHOTO SHOW we well meet the artists who create images of the future: Phillip Toledano, Vincent Fournier and Kobas Laksa.


And for the permanent feature of Fotofestiwal: Grand Prix finalists’ exhibitions. This year there are 10 finalists. Stigma project by Adam Lach, initiated as a made-to-order reportage, gained attention of the New York Times and was awarded with an honourable mention at the Picture of the Year. The photographs tell a story of a 60 people strong Romanian Romani family residing at an encampment in Wrocław. Yet it is by no means another chapter in the colourful legend, with which the Romani community is mistakenly associated. Elena Chernyshova, laureate of this year World Press Photo, will present a project devoted to Norilsk, one of the most polluted cities in the world. The winner of the Grand Prix Fotofestiwal 2014 will be announced on the first day of the festival. The winner will be awarded 10 000 PLN.
Accompanying exhibitions will feature works by Polish artists such as Anita Andrzejewska and Kuba Dąbrowski, but also Evgenia Arbugaeva, winner of the Leica Oskar Barnack Award 2013. Arbugaeva will tell us about her fairy-tale childhood in faraway Siberia. Evgenia has made one of the most interesting photography debuts in the recent years. We will see her work owing to the collaboration with the Leica Gallery in Warsaw. 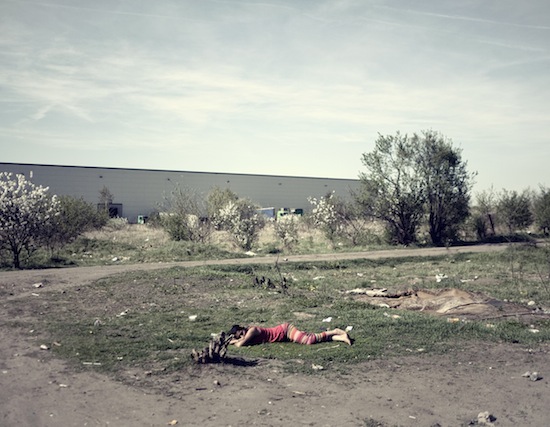