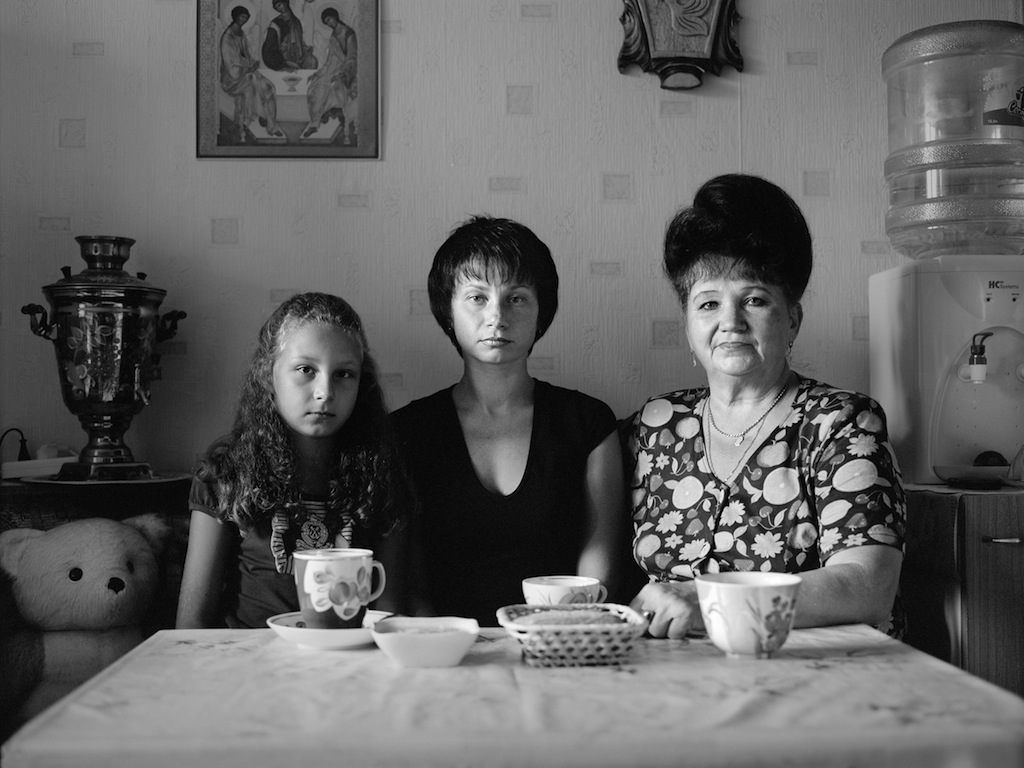 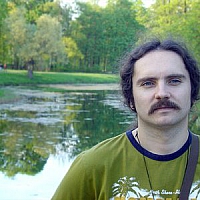 The Moscow House of Photography has brought three Russian contemporary photographic exhibitions to the Tenerife Island Photography Centre that are among the most prominent in representation of the contemporary Russian art scene: Tim Parchikov, Ivan Mikhailov and Sergey Shestakov.

Although Tim Parchikov (b. 1983) and Ivan Mikhailov (b. 1981) belong to a new artistic generation, they have already mounted several individual exhibitions in Russia as well as overseas. Currently, the works of both form part of the "OBLIVION, MEMORY AND REMINISANCE” (“L’OUBLI, LE SOUVENIR, LA RÉMINISCENCE”) exhibition of the Fifth New Festival at the Pompidou Centre (Le Nouveau Festival du Centre Pompidou).

The three photographers explore the theme of memory: historical (Parchikov), genetic (Mikhailov) and social (Shestakov). Each of them studies the mechanism of how information accumulates and is transferred, and the composition of objects that trigger memories in the viewer.

In his « Magnitogorsk » project, Tim Parchikov observes the transformation of the mono-city of Magnitogorsk, which was founded in 1929 and became one of the first urban development projects in Stalin´s era of industrialisation. The artist is interested in architecture, ecology and above all, people, whose lives, just as 60 years ago, depend in one way or another on the Magnitogorsk metallurgy complex.

Although Parchikov explores the specific problems of a city in Russia, the project is typologically interesting for all countries facing the problem of depression and closure of metalworking industries, which, although running on inertia, exert a pull on the lives of the local citizens.

Magnitogorsk is a city stuck in time between the Soviet era and that of modern Russia. On the one hand, it appears that its people are still living in the Soviet past, but on the other, the reality shows signs of new the capitalist influences that have invaded life with limousines and publicity. The city is completely dependent on the factory, which continues to operate, but which could follow in the footsteps of the great industrial zones of Eastern and Western Europe. What will become of Magnitogorsk and its citizens? – This is Tim Parchikov´s question.

Ivan Mikhailov addresses the theme of genetic memory, showing in his works three or four generations of women related by blood: mothers, grandmothers, daughters and granddaughters. Changing social reality exacerbates the contrast between the generations, but despite this, Ivan Mikhailov´s family portraits show how people are more united by their family blood ties than time or social attributes.

Sergey Shestakov first became known after his « Journey to the Future. Stop No. 1 » project, dedicated to Chernobyl. In 2011, risking radiation exposure, Shestakov entered the Chernobyl exclusion zone, to be able to document how the place was now, 25 years after the terrible technogenic catastrophe. Taking photographs in a nursery there, of children´s books reduced to dust, he found a book by the Soviet writer Zoya Voskresenskaya, with a portrait of Lenin, called "Journey to the Future", from which his project took its name.

Shestakov focusses his attention on the theme of the legacy that our current civilisation will leave for future generations. To what degree does the fragile world, that we believe we reign, depend upon a simple human error, natural events, a technogenic catastrophe, of the abandonment of places by their inhabitants?

The « Journey to the Future. Stop No. 2. Gudym » project shows us the remains of a military base constructed in Chukotka at the time of the Cuban missile crisis during the Cold War and the active confrontation between the USA and the USSR. The base housed soviet missiles. The disarmament process at the end of the 80´s, the fall of the Iron Curtain, together with the collapse of the USSR, meant that the base, which employed over 100 people, became completely abandoned. Among its ruins, just like those of the exclusion zone at Chernobyl, there now lives only one old woman. In her home, on the wall, there is a paper icon with a handwritten note: « Everything will be fine, only different ».

The exhibition poses questions about our responsibility to future generations, about the world that we are going to leave them and about the probability that Parchikov´s Magnitogorsk will become, if the factory should close, another zone like Gudym.

Magnitogorsk – the child of one of the greatest utopias of last century was the first “monogorod” (a city built around a production plant) built in the 1930s and was formed in the empty land in the southern Urals around the Magnetic Mountain, which is where the city’s name comes from. Today the Magnetic Mountain has almost disappeared. All the ore has already been dug up and the raw materials now come from Kazakhstan. The city’s population comes close to half a million. This is one of the most polluted cities in the world. The smog clouds never lift from the city, and they give off a yellow light with pink shadows. This is still a “monogorod” and depends, more than ever, on the factory. All small and middle sized businesses of the city are connected to the production. The airport, the city administration, including the appointment of the mayor, all depend on the production’s management, that is also responsible for the support of a hockey team as well as a loyalty to the party in power. It seems that time has stopped in this city. The utopia has been buried. There are no more illusions, but the disillusions are also no longer felt. It is well known that the situation is not stable, that the new economic crisis, or competition from the Chinese metal market can destroy the factory at any point, and the city could descend into an economic and humanitarian catastrophe. This hidden threat is constantly present in the city and this element threads through all the aspects of life here. 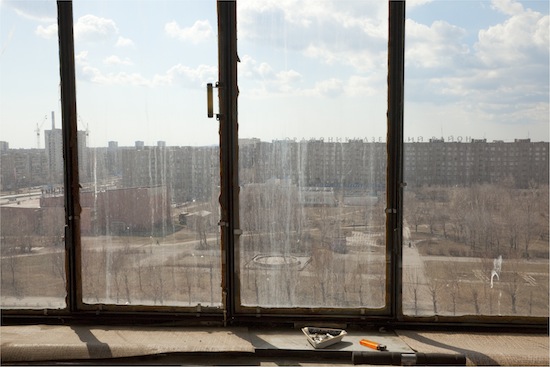 In my project I try to show my own time through a series of family portraits, through the faces of women from various generations, concentrating on such subject as genetic memory. This is an attempt to examine the nature of time and its effect on people. Tracing similarities and differences, mutual relations, the details of the period – like a vast domestic family archive that people may scrutinize hundreds of years hence, gazing into the women’s faces. I have always liked looking at old family photographs: peering into faces, observing interior details, how people dressed and how they stared into the camera. Photography is like a time machine that allows us to travel to the past and wander through the labyrinths of memory. The greater the distance, the further the event, the easier it becomes to generalize and perceive them in their entirety.

Built in 1958 by order of Nikita Khrushchev as part of the USSR Northern Nuclear Defense project, this unit directed intercontinental ballistic missiles (ICBM) launches aimed at the USA. The facility located ten kilometers from the aerodrome included the military town Anadyr-1, an ICBM base and underground railway for transporting cargo. To comply with the signed agreement for SRBM and MRBM (short- and medium-range ballistic missiles) the USSR had to destroy all its SS-20s in 1991. The facility was deactivated between 1992 and 1998, and in 2002 the military abandoned it altogether. Residents of the military town were resettled in Engels and Saratov.

« Everything will be fine, just different… »

Two years ago I began a research project on what modern civilization is leaving behind for future generations. My 2010 photographs of the town of Pripy at Chernobyl suggested a name for the project – ‘Journey into the Future’. That was the title of one of the partially decayed children’s books left in a kindergarten after the horrific accident. Chernobyl was ‘Journey into the Future. Stop #1’.

On my first visit to the tiny settlement in Chukotka that the locals call Gudym (the story goes that a certain Colonel Gudymov was head of construction – he shot himself the day after work began to build the facility, after receiving a congratulatory telegram from the Pentagon), there was a strange feeling that I had seen all this before – in Chernobyl, in the Norwegian town of Pyramids and Famagusta in Cyprus… Different towns, different countries, different reasons why people were forced to leave their homes…

In Pripyat the only living soul was an old lady who lived generally on mushrooms and berries. In Gudym the only inhabitant of a settlement where several thousand people once served is Tatyana Georgievna. Above an icon in her small room, there is a scrap of paper with words written in ballpoint: ‘Everything will be fine, just different…’ God knows how she manages to exist without the elementary comforts of life and still retain her optimism and genuine goodwill.

This woman and the words that became an epigraph for my work make us believe that one day we will cease to live only for the present, exploiting the environment before letting it go to waste. We will think about the future and what we leave for our descendants.

Everything will be fine, not different! ... 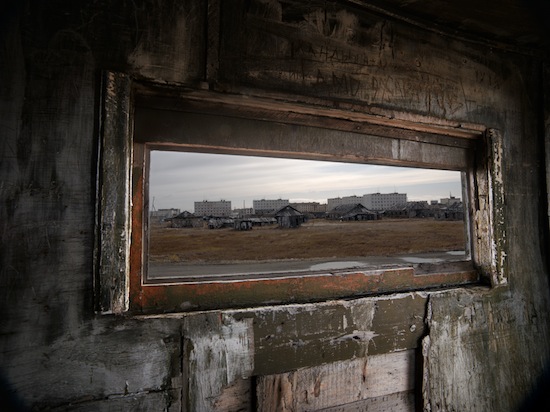