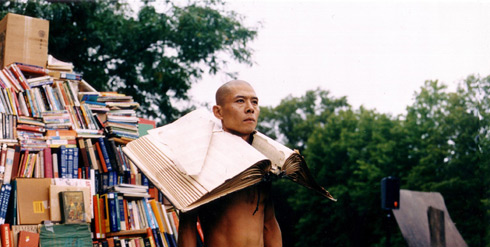 Opening: Saturday, March 18, 7 p.m. Galerie Volker Diehl presents new works of Zhang Huan, one of the representatives of the Chinese performance scene. Among the works, My Boston, a recent performance at the Museum of Fine Arts, Boston, Massachusetts is presented as photographs documenting the action. Zhang Huan explains the inspiration for his performance: When I was young, my mother often told me "You have to study hard so when you grow up you have a bright future." But I never liked to read books. Whenever I read a book my mind always wanders off and I fall fast asleep. I tried many different ways to keep myself awake and concentrate. For example, I would bite my hands, stab my flesh with a pen, and in Winter I would dunk my head into a pot of freezing cold water I was really practicing the old Chinese idiom. I couldn't help it, I would forget what I read immediately, so I read again and I still can't remember, not to mention I couldn't understand it at all. Later on, I had a great idea. Everyday I'd tear a page out of a book and eat it. The result was I couldn't digest it at all, and I shit out the exact same thing as I ate. I had many dreams involving books. In one of the dreams I discover all the books that I have ever owned were being blown all over the sky by a mighty wind. Suddenly, in a split second, all the books were floating on the river toward the East. It was very unpredictable. Before moving to New York in 1999, he lived in Beijing, where he and other artists formed a group called "Beijing East Village". Beginning of the 90's, under the influence of the post Tienanmen era, Zhang Huan and all other artists of avant garde art in Beijing felt themselves forced to retreat into private spaces. His critical view on social and private situations of life was interpreted by the government as a subversive act.