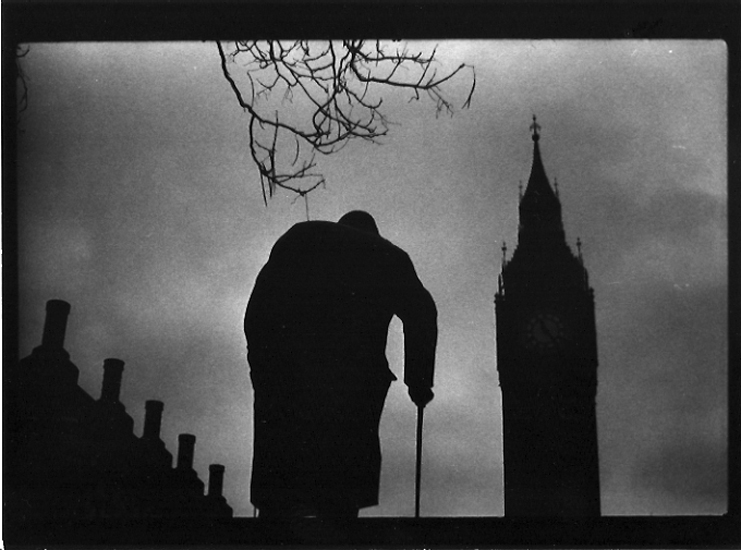 Print Sales is pleased to present Eternal London, a new body of work from Italian photographer Giacomo Brunelli. Shot in black and white over a period of two years, the series is an exclusive commission for Print Sales.
Brunelli (b. 1977, Italy) is best known for his critically acclaimed series The Animals I/II(2005-2009), a collection of striking portraits of animals in Italy and the UK. In Eternal London Brunelli uses his distinct film-noir style to create a unique and evocative view of the capital and its famous landmarks. The images are framed around the silhouettes of people and animals, including the statue of Winston Churchill depicted alongside Big Ben, a dog running into the Thames and a woman featured against the backdrop of St. Paul’s Cathedral.
Brunelli takes his photographs during daily early morning walks, randomly choosing a person to follow before focusing his camera on them. Working discreetly, Brunelli often uses a removable viewfinder, to be able to photograph his subjects from waist height and other unusual angles, such as directly from behind and with extreme close-up. He protects their anonymity by obscuring their faces while exploiting light, shadow and contrast to imbue his images with a dramatic atmosphere and a feeling of claustrophobia.
Working entirely in analogue format, Brunelli shoots his photographs with a 1960s Miranda Sensomat 35mm camera given to him by his father, and meticulously hand prints his photographs in limited editions.