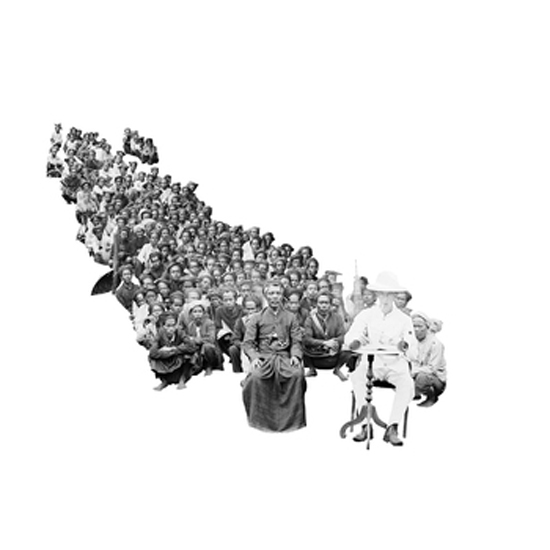 Tyler Rollins Fine Art is pleased to present Picturing Power, the first solo exhibition in the United States for Yee I-Lann, taking place at our gallery in New York City from February 27 to April 12, 2014. Widely considered to be among Malaysia’s leading contemporary artists, Yee works primarily in photo-media, often engaging with archipelagic Southeast Asia’s turbulent history and addressing, with wit and humanity, the socio-political impact of current politics, neo-colonialism, and globalization.

The exhibition will focus on three recent series: Picturing Power (2013), eight digital collages referencing the history of photography as it relates to the development of colonialism in Southeast Asia and its contemporary legacy; The sun will rise in the East and deliver us from this long night (2012), a photographic installation of neon-colored Braille-like motifs of embracing couples that can be read as an attempt to disarm the past; and Tabled (2013), a series of ceramic dinner plates inspired by traditional blue-and-white china but printed with photographic images of ordinary people, developed for the group exhibition, Suspended Histories, curated by Thomas Berghuis and recently on view at the Museum Van Loon, Amsterdam, the Netherlands (October 5, 2013 – January 20, 2014).