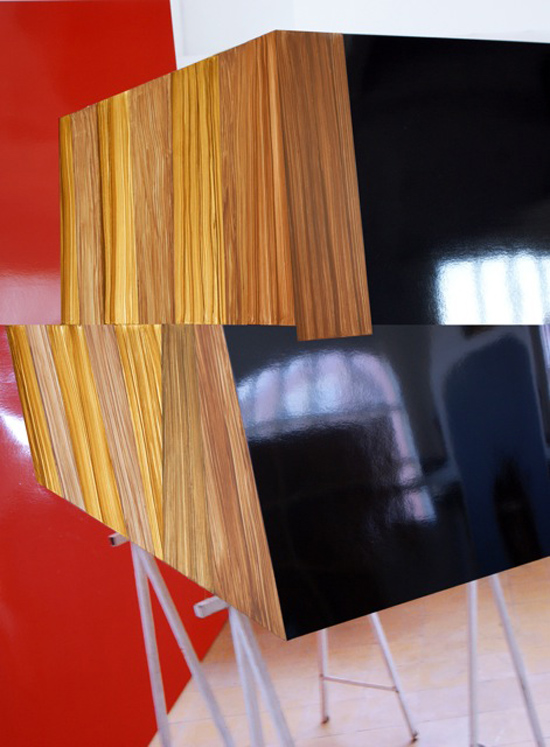 Yancey Richardson is pleased to present STUDIO , the second solo exhibition at the gallery by Basque artist Pello Irazu . Combining aspects of conceptualism, minimalism and constructivism, Irazu ʼ s practice utilizes objects and images drawn from his studio to explore the tensions between two dimensions and three, between surface and image , and between phot ographic representation, painting and sculpture. As the artist describes, " I like the in - between area between disciplines, the fluid dialogue between my studio space, the sculptures, the photographs and the installation." The exhibition feature s a select ion of serialized photographs depicting constructed objects from the artist ʼ s studio , each of which ha ve been uniquel y p ainted on in a tromp l ʼ oeil style and re - photographed to create new forms. Additionally, a group of spare, constructivist sculptures complement and mimic the painted photographs, addressing the relationship between representation, materiality, and ornamentation. The gallery walls are also treated as a canvas by the artist, creating a mater ial context and bridge between the photographic and sculptural elements .

Known predominately for his sculpture and wall drawings, Irazu has begun using photography in dialogue with these media, relating photography ʼ s ability to reproduce reality to the idea of casting familiar objects. In both mediums , Irazu ʼ s treatment is to undermine the reliability of surface vis - à - vis deconstruction o f material authenticity. C ommonplace studio items such as cardboard boxes and wood blocks are typically cast and painted , and then re assembled as discreet sculptural o bjects on the floor and wall. A pared down, lyric economy of line characterizes the se quietly elegant abstractions of simple geometr y . The painted surfaces often conflate material representation: a piece of cast aluminum in the shape of a wood block, paint ed in acrylic to resemble a natural wood grain, for example. The sculptural forms often reappear in the photographs , obscured by the artist ʼ s painting on the surface of the prints. C lean - edged bands of paint appear to be pieces of paper or tape collaged to the surface of the prints while simultaneously reading as physical objects in the image , such as a plank of actual wood attached to a sculpted chair or a wall in the studio.

Born in 1963 in Andoai n, Spain, Pello Irazu currently lives and works in Bilbao , Spain . He has exhibited internationally including at the Venice Biennale, the Reina Sofia and the Guggenheim Museum. In 2013, Irazu ʼ s room sized installation – Life Forms 304 – featured in the exh ibition Inhabited Architecture at the Guggenheim Bilbao with Liam Gillick, Doris Salcedo, Mona Hatoum, and Cristina Iglesias. Irazu's work is held in the collections of major institutions including The Guggenheim, Bilbao, The Museum of Contemporary Art, Ba rcelona, The Reina Sofia, Madrid, the Yves Klein Foundation, Arizona and the Museum of Contemporary Art, San Diego. A recipient of many European awards, Irazu received the Icaro Prize for the best young Spanish artist , and a Fulbright Grant to live and wor k in New York