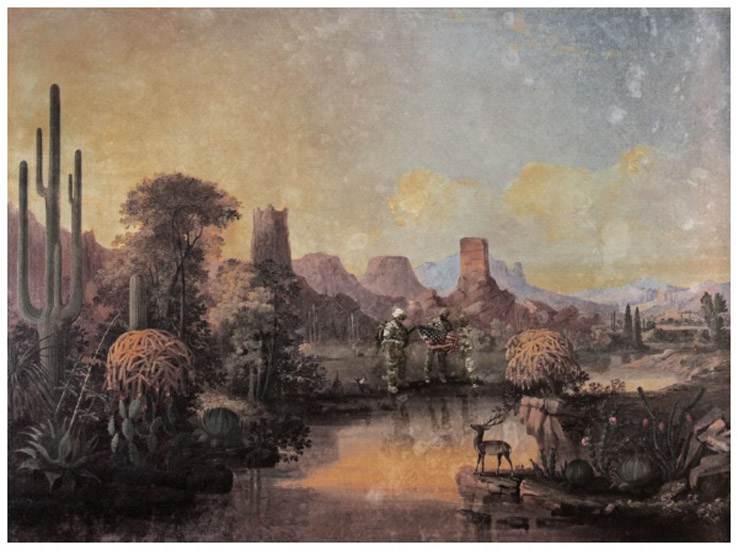 In her new series, Wetiko: Cowboys and Indigenes, Egyptian artist-photographer Nermine Hammam manipulates historical paintings of the American West with recent photographs of the Arab Spring – that wave of revolutions, uprisings and protests that has spilled across the Arab world since 2010.

Walking around Cairo, she has witnessed protesters faking their deaths for visiting photojournalists; watching TV at home, she has seen the media rally support for an attack on Syria with a photograph of alleged chemical-attack victims wrapped in shrouds. But that moving BBC News photograph was taken in Iraq in 2003, not Syria in 2013. “I realized that the mechanism of trust has disappeared from the written word and the published image,” she says. “Our trust has been challenged by manipulation, forgery, and the constant rewriting of narratives and counter-narratives.”

Hammam has found parallels between the mythologizing images of the artist-correspondents of the Wild West, such as Frederic Remington and Charles Marion Russell, and the international community’s influence in the Arab world. In both cases highly emotive images have been widely used to justify aggression. Wetiko is therefore about ways of seeing. “We think we know how to look at something, but if we change one element it affects our entire reading of the scene. How do we re-read the story if one element is missing or replaced with another? In Wetiko I deliberately use the chronological collapse between images not only to heighten the absurdity of the situation but also to mimic the realism and historic authenticity.”

In Remington’s Aiding a Comrade, two cowboys try to rescue a companion who has fallen from his horse while fleeing Native Americans, but in Hammam’s image, a pro-Morsi protester charges ahead of the cowboys, referencing the rumors that the Muslim Brotherhood is supported by US funding. Will this alliance topple anyone from his horse? Similarly, Days on the Range (Hands Up) depicts a posse in pursuit of an unseen foe – will the young protester in Hammam’s photograph be caught in the crossfire?

When and how the turmoil will end is anyone’s guess, but for Hammam one thing is certain: “Wetiko” – the Native American Cree tribe’s ancient word for compulsive consumption of the earth’s resources – is becoming an epidemic.