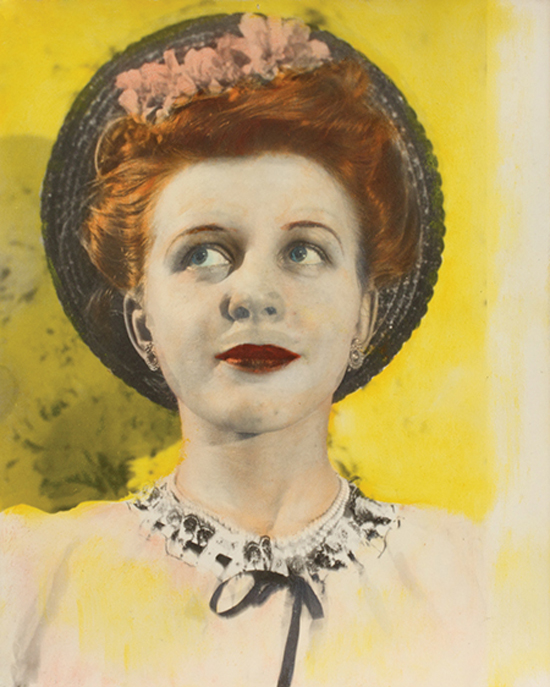 When Eugene Von Bruenchenhein died in 1983, he was known as little more than an employee at the local bakery in his small suburban corner of Milwaukee, Wisconsin. Only a tight coterie of family and friends were made privy to his obsessive, prolific life as an artist and writer, who labored for forty years - often into the early hours of the morning to create the treasure trove of paintings, photographs, ceramics, drawings and sculptures, as well as reams of poetry and philosophical musings, which stuffed every corner of the modest home he shared with his beloved wife, Marie. Only after his death, when a family friend brought Von Bruenchenhein sculptures to the Milwaukee Art Museum did his status as one of America's greatest visionary artists come to light. Maccarone is proud to present "Bits from First World", the gallery's first exhibition of the work of Eugene Von Bruenchenhein, on view from March 1 - April 12, 2014.

Von Bruenchenhein seldom strayed far from his home, which had previously belonged to his family, and an attempt to join the army during the Second World War failed due to his short stature. Thus much of his work sprang solely from his imaginative forays into the vast reaches of space and time, and his layman's investigations into the beguiling isomorphism that binds the micro and macroscopic worlds. For this latter endeavor, Von Bruenchenhein employed both telescope and microscope, translating the alien worlds hidden from the naked eye into the bristling, kaleidoscopic paintings rendered with his fingers in such furious, concentrated intensity that a friend once described him as working "like a man possessed". Concurrently, he spun grand cosmological speculations centered on his theory of Earth's ancient progenitor, dubbed First World, a giant planet from which our own splintered off in a cataclysmic event not unlike the one that scientists believe formed our moon. First World teemed with exotic plant-animal hybrids and was studded with spindly, crystalline architecture both of which inevitably made their way into Von Bruenchenhein's paintings, some of which depicted the fictional planet itself, while others addressed more terrestrial concerns.

Unlike many artists who fall into the elastic "Outsider" category of art, Von Bruenchenhein was not insulated from the broader world. In fact, a significant number of his paintings from the 1950s and 1960s directly address his fear of nuclear annihilation and the horrors of war, where his alien creatures become allegories of destruction and signs of ill portent.

Perhaps as a kind of Utopian rejoinder to these alarming works, Von Bruenchenhein's paintings from the late 1970s and 80s of soaring, cathedral-like towers were made as testaments to modernity, or what he called "the Age of Colored Stone and Steel". These works fit easily into the rich history of imaginary architecture, which stretches back to Étienne-Louis Boullée in the 19th century, and includes the similarly tower-obsessed Outsider A.G. Rizzoli, who drew elaborate edifices as tributes to his mother and a smattering of others who made cameos in his relatively lonely life. Yet Von Bruenchenhein's towers, which also include his fragile spires made of chicken bones and painted with brushes fashioned from Marie's hair, have the most direct connection and striking similarities to Simon Rodia's Watts Towers. This may not be a coincidence: a newspaper clipping featuring an image of Rodia's towers was discovered among Von Bruenchenhein's papers, suggesting a possible chain of influence relatively unprecedented in the annals of Outsider Art.

Similarly, a connection could be drawn between a Victorian-era decorative arts book found in Von Bruenchenhein's possession and his elaborate, botanically-inspired vessels that were formed out of clay dug from local construction sites and fired in his home's coal burning stove. Other clay works - imposing masks, totemic heads, wall-mounted crests - were likely inspired by a pair of books on Pre-Columbian art, or by his extensive collection of National Geographic magazines, from which his many phantasmagorical creatures were also born. But as with his imaginary bestiary, the chasm between the probable source material and his final clay creations is vast, bridged only by his own prodigious and idiosyncratic imagination. They appear as relics of a lost civilization, one whose home was not on any map, but situated somewhere in the vast antipodes of the mind. Viewed in this manner, some of the most significant clay pieces would seem to be his series of crowns, which often resemble baroque elaborations on the traditional Greek laurel wreath. They serve, in all likelihood, as signifiers of Von Bruenchenhein's sense that he was in some way anointed, whether by actual lineage (he often signed pictures of himself "King", "Duke of Saxony", or, somewhat hilariously, "Edward the Durable", and frequently claimed he had royal blood) or by dint of his artistic genius, which he believed in fervently.

By extension, this anointment also fell to his wife, to whom Von Bruenchenhein was endlessly devoted over the course of their forty-year long marriage, and whom he photographed extensively over the course of 20 years, occasionally wearing her own crown that he assembled from a tin can and a collection of Christmas ornaments. These photographs, which are by turns tender, playful, and erotic, often resemble classic pin-up pictures, though the riotous textiles of Von Bruenchenhein's backdrops and Marie's costumes cannot help but call to mind the work of Malian portrait photographers like Seydou Keïta and Malick Sidibé. However, the photographs' significance do not rest solely on their aesthetic merit. Like Alfred Stieglitz's photographs of his wife Georgia O'Keefe or Harry Callahan's photographs of his wife Eleanor Callahan, Von Bruenchenhein's portraits are part of a rich lineage of photographic testaments to marital intimacy. Unlike these precedents, however, one does not get the sense that Eugene and Marie's lives are but heightened, more sharply observed versions of our own. Instead, their intimacy is played out on a stage constructed by Von Bruenchenhein, on which Marie inhabited her roles as queen, ingénue, bombshell, and friend. It was there they lived together, in a world apart.