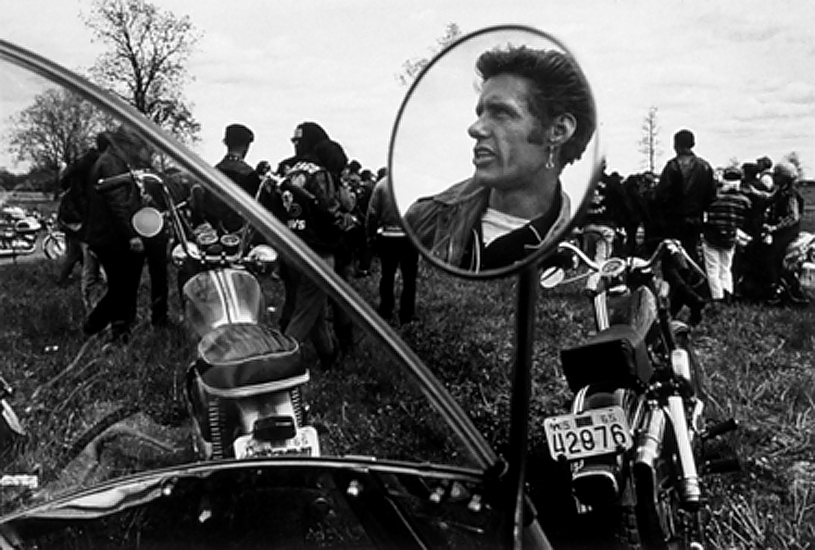 During the 1960s and 1970s several photographers, including Diane Arbus, Larry Clark, and Susan Meiselas, documented life on the fringes of society, providing a glimpse of counterculture from the inside out. These images were often published as narrative sequences in books that told complex stories in multiple pictures. In the early 1960s Danny Lyon (U.S., born 1942) joined the Chicago Outlaw Motorcycle Club and began photographing his fellow Hell’s Angels while traveling with the club on his 650cc Triumph motorcycle. The result was one of the seminal photographic essays of his generation, and the 1968 publication The Bikeriders that contained over 50 photographs and interviews with Lyon’s subjects.

In pictures of dirt track racing and motorcycle gang life, Lyon captures both the realism and the romantic notion of the rebel on a bike, which was later demonstrated in the Hollywood film Easy Rider (1969). This exhibition presents a selection from that body of work, in celebration of the Henry’s acquisition, through a gift and promised gift, of a set of images from The Bikeriders.
Danny Lyon: The Bikeriders is organized by Sylvia Wolf, Director. Henry exhibitions are supported by gifts to the Henry Now Campaign from the Barton Family Foundation in memory of Irving Marcus; Cathy and Michael Casteel; the Jon and Mary Shirley Foundation; William and Ruth True; and the Bagley and Virginia Wright Fund.
Featured artists: Danny Lyon