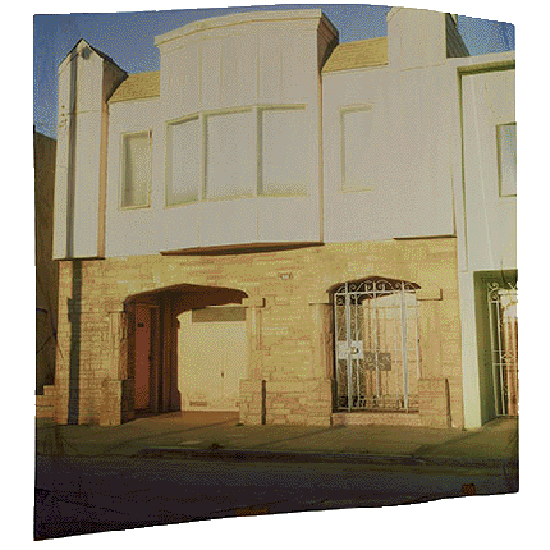 For his second solo exhibition at Haines Gallery, Bay Area-based photographer John Chiara continues his in-depth explora - tion of the San Francisco landscape by focusing on the idea of a city in tran - sition. While the new photographs are undeniably about a particular place—evok - ing a light and mood characteristically associated with San Francisco—they speak more broadly to the ways we experience what the artist describes as “the blended character of memory in relation to spe - cific moments or places.” Using cameras he has designed and built himself, Chiara’s inventive techniques, such as printing directly onto positive color photographic paper, leave behind visible traces of his process. The resulting works of art (each picture is unique) invite us to contem - plate their content while pointing to the chemical aspects of their creation. The subtle streaking, overexposure and sudden sharpening of detail Chiara achieves in the works presented in de • tached ampli - fy the sense of disassociation suggested in the exhibition’s title.

Chiara has recently begun to photograph the facades of houses throughout San Francisco’s Excelsior and Sunset dis - tricts, producing portraits of mid-cen - tury architectural styles distinctive to the neighborhoods. These buildings often fill the image with a monumentality that belies their unusual eccentricities and aged appearances. Rather than wax nostal - gic about a bygone era, these pictures

our landscape. The works reinterpret the experience of meandering past these homes and shed new light on these fixtures of our cityscape. In a related body of work, Chiara depicts transitional spaces—both urban land - scapes and scenic vistas—where viewers are never privy to the final destination. While they often read as familiar sites, these photographs evade simple definition, blurring the lines between the realities of the depicted locations through Chi - ara’s use of multiple exposures and other photographic processes. Taken together, the works on view in de • tached tell a thoughtful, complex story about the changing San Francisco terrain, inviting viewers to linger over the past and to reconsider the present, particularly with respect to the built environment. Chiara’s photography has been widely exhibited in group and solo exhibitions nationally and abroad and collected by institutions such as J. Paul Getty Museum (Los Angeles. CA); Haggerty Museum of Art (Milwaukee, WI); Los Angeles County Mu - seum of Art (Los Angeles, CA); the Museum of Photographic Arts (San Diego, CA); Na - tional Gallery of Art (Washington, D.C.); the Pilara Foundation, Pier 24 Photogra - phy (San Francisco, CA) and the San Jose Museum of Art (San Jose, CA). Chiara was an Artist in Residence at Crown Point Press, San Francisco (2006) and the Marin Headlands Center for the Arts (2010). The artist lives and works in San Francisco.