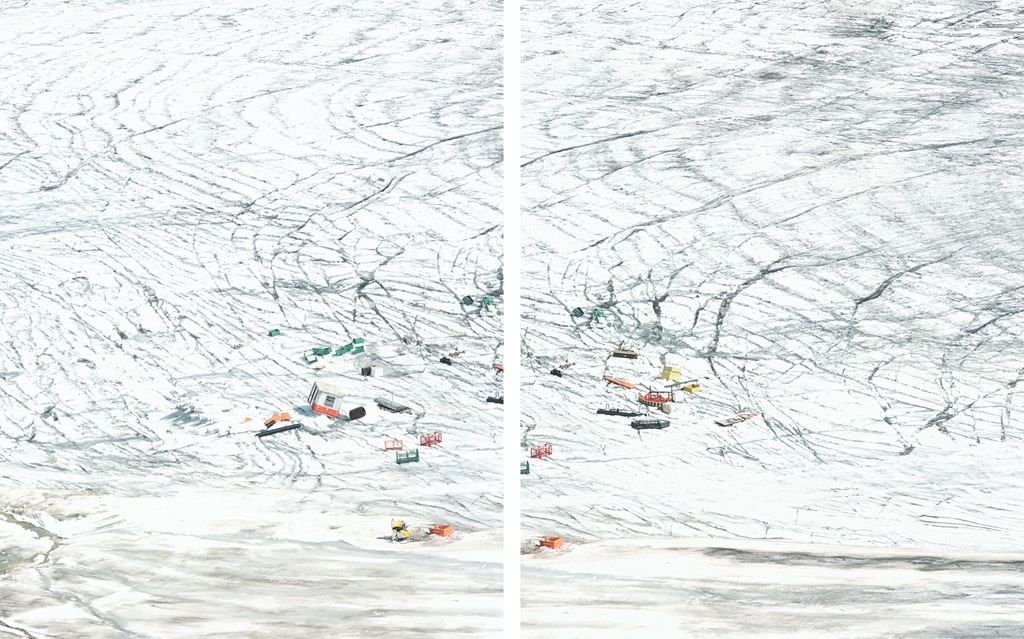 Galerie Nordenhake is pleased to present a solo exhibition of Italian artist Walter Niedermayr. For his fourth exhibition at Galerie Nordenhake Berlin, the artist will show current works from his ongoing series, Alpine Landscapes. After making a series about the ski resort Aspen in the American Rocky Mountains between 2009-2011, Niedermayr returned to the European Alps to develop the body of work for the present exhibition. The artist is widely recognised for his large-scale, subdued photographs of alpine landscapes and images of the architectural spaces by Japanese architecture firm, SANAA. In each of his series, Niedermayr maintains a focus on man’s relationship towards his surroundings. For the works in the exhibition at Galerie Nordenhake Niedermayr focuses on our growing intrusion on nature through acts of entitled avocations.

Since the 1980’s, Niedermayr has been interested in exploring the various ways in which space has been shaped and occupied by man. He questions the ephemeral realms between representation and imagination through the lens of his camera. Engaging with the tradition of the great landscape artists, Niedermayr’s compositions stop and suspend time and encourage the viewer to re-evaluate our imposition on nature: He assembles single images of the same motif into one seemingly continuous panorama. The resulting multi-panel images provoke a dualistic disconnectedness, both spatial and temporal. This approach unsettles photography's designated role of capturing a moment in time and denies the possibility of landscape as a unitary image.

Throughout his current work the discord between man and nature becomes more and more apparent. In both the diptych, Dome des Petites Rousses 16, 2013 as well as the video work, GoPro, 2013, Niedermayr exposes man’s manipulation of nature as a platform for sports and recreation. "From a spatial point of view, everything is perpetually changing; including people and fashions. Nothing changes as quickly as the world of tourism, with leisure and sport activities evolving. These forms of movement create new structures within the landscape and change the circumstances of the present” (Walter Niedermayr).

People are captured in his photographs walking on glaciers (Eggishorn 18, 2012), skiing (Jungfraujoch 28, 2012) or cycling along the mountains. While they are positioned in nature, the people do not seem to be connected with the landscape that surrounds them. Wandering about a strange terrain or a surface that suits their activity, they seem disjointed rather than experiencing the landscape. Their gestures and behaviour suggest a presence that is more of an occupation of rather than a relation with the landscape, there seems to be more of a distance or even indifference than a true realisation of the nature.

His work is represented in international public and private collections such as The Centre Pompidou Paris, Museum of
Contemporary Art MoCa Los Angeles, Philadelphia Museum of Art, Albertina Wien and the UBS Collection, among others.
Since 2011 Walter Niedermayr has a lectureship for Fine Art photography at the Faculty of Design and Art, Free University of Bolzano. Recent monographs: 2013 The Aspen Series, Hatje Cantz, Ostfildern; 2011 Appearances, Skira, Milano; 2010 Recollection, Hatje Cantz, Ostfildern.