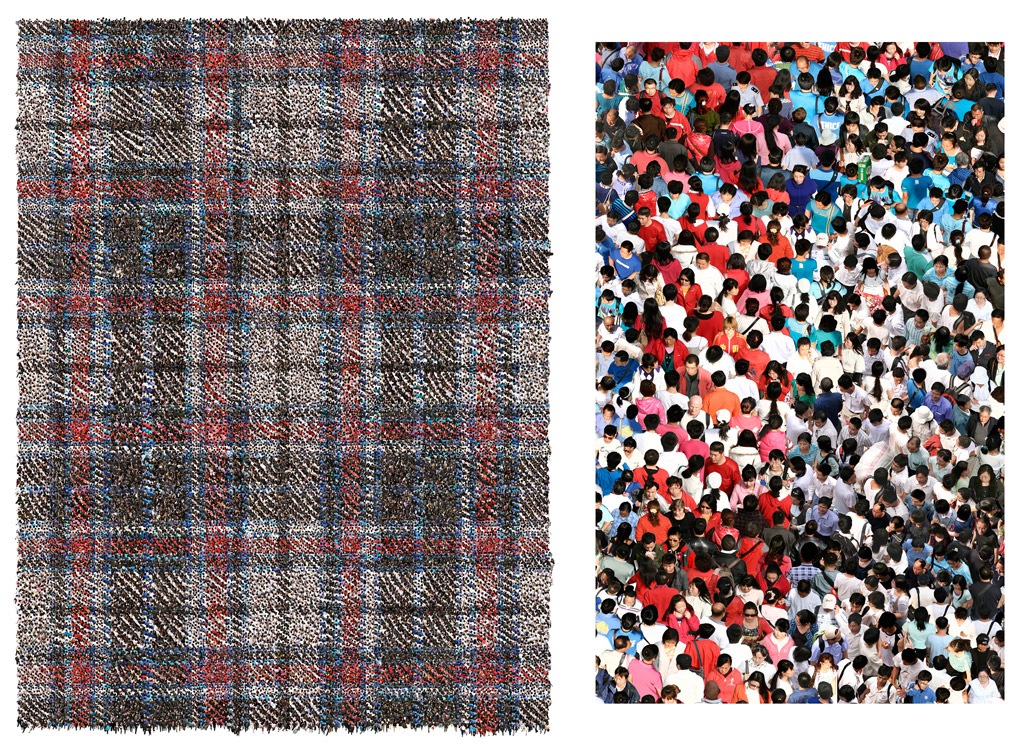 When watching Zhang Bojun's "We" series, we always squint at the whole picture and goggle at the details. This is how the work wants us to watch as well as Zhang Bojun's purpose. If not so, we have to bother our feet to step back or forward; otherwise we never understand the difference between the representation and the presence. Every audience is formatted by Zhang Bojun's "format" unconsciously, which is another extension of "We" series.

"We" series is easy for anyone to appreciate and understand without over-interpretation and explanation. The work itself is both the form and the content. While Honore Balzac said more thoroughly: "Everything is form, so is life." Zhang Bojun's artistic language is a universal doctrine. His expression is clear and bright, even simple and easy. There is no obscure and mystifying part of contemporary art and indifferent aristocratic social distinction. Just as the title "We", it's us and ours, friendly, intimate and naturally joyful with each other.

This post-produced digital photography of Zhang Bojun may be easily defined as "conceptual photography". This misleading and confusing term has nothing to do with the artwork's unlimitedness. Art doesn't depend wholly on the artist's intention; the ＆#118alue of art lies in that the art work creates art after being created by the artist! Sometimes, we appreciate the artist's creation but don't expect the artist to have binding engagement with art. The artist wants to become attached to art and ignore its complicated and chaotic history of love affairs. As for aesthesis, not only the artist shall maintain vigilance of any attempt to establish a system after formatting but the audience shall be precautious beforehand. The artistic expression of "We" is figurative on the whole but developed towards abstract geometric format by Zhang Bojun. Is it influenced by Russian constructivism, German Bauhaus, French Cezanne, Dutch Mondrian or Chinese artist Ding Yi who always paints cross grids? Personally thinking, it is barely a question. The life of art form is always the product of social life from the beginning that God borrows human hands to create. If asked about the source and provision of art, it is better to question God.

Millions of crowd images in bustling city are bird eye shot on the overpass. Zhang Bojun uses Photoshop to carefully "dig out" those different looks of the photos as material "units". He collects trillions of vast electronic data, classify and archive by hue of color and set up an enormous portrait database and image empire. When this project finished, Zhang Bojun is again very cautious to photoshop them according to the established form and color, which consumes his mind, time and labor. The boring multifarious repeated behavior is actually Zhang Bojun's self-formatting. The creation process is an action art and the title might best be his words "we are doing the same thing every day", though he doesn't have the will and ambition to show action art. Self-formatting begins with physical unconsciousness and then formats self-consciousness which facilitates a game between passive formatting and initiative formatting, while the outcome is that Zhang Bojun dramatically shrinks, collages and reconstructs human body "units". When these unique individuals lose visual identification, they become the uniform similar icons in the pictures with unified file name extension "tif" so that the symbolic process of initiative and passive formatting is done. The combination of final visual presentation and creation process is a metaphysical artistic expression by individual unconsciousness after active body unconsciousness, which eventually evolves to be collective unconsciousness after passive formatting. The various alive, free and rich individual lives are frustrated, formatted and squeezed into a compact mass, breeding pathological anxiety to those who have trypophobia and psychogenic anxiety and to others who are misled by "plaid" trick at the first close look of the pictures. But we can hardly cure the anxiety by "We". 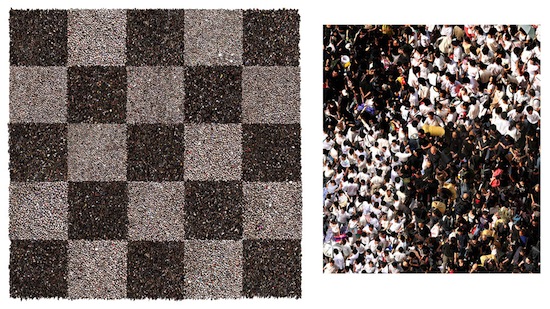 The initiative and passive formatted individuals are stuck in an awkward situation like Sisyphus in ancient Greek mythology punished by Gods rolling a stone to the top of a slope but the stone always rolling down again due to its weight day after day. Sisyphus is us under the destiny of formatting. Abandon sacrament and wisdom, willing to choose initiative and passive captivity, we find reasons for being under such servitude, assuming crime and punishment, free and bondage, dignity and shame, strong and weak, and the so-called happiness. The French existentialism litterateur Albert Camus said when awarded the Nobel Prize in literature in 1957 that he doesn't believe in God but still kneels before a saint and pray – the saint is Sisyphus. "The Myth of Sisyphus" is a paean that Camus wrote for the absurd hero in his heart. The ancient Greek blind poet Homer also thinks that Sisyphus is the most clever and cautious one among those who would die finally. The recipe for the absurd victory is that happiness is to live not as bad as others. Ignite the low fire of hope by pathetic emotions. Francois Richard mentions at the end of Milan Kundera's "La Vie est ailleurs" book review: "This is human nature, like Chveik says: 'as long as we are alive, we are deceiving ourselves.' But we must live well..."

Such heavy and depressing interpretation is like these cold plaids. No matter the silent crowd in the picture are wearing beautiful bright red and cold blue or black and white, the gathered and moving crowd are hurried in shiny reward, which brings phonism from the remote and dim deep floating and rolling sound waves, blowing away haze and smog. At this delicate moment, life is infinitely shrunk back to soft cilium growing wildly on the earth, uprooted by great power without exception and alternatives, doubling thread, sewing yarn, dyeing vertically and horizontally into various similar plaids so that the symbol and existence are derived. Like many Chinese chase after the British luxury brand Burberry's four-color plaids, abandon the old known world but meanwhile desperately seek for the Scottish plaid world of imperial order and delight in the "Chinese plaid" granted by the British, imaging and simulating the ultra-formatting of British plaids such as royal plaid, noble plaid, legionary plaid, governmental plaid, chief plaid and group plaid, etc indicating family, lineage, rank, social stratum, organization and profession; formal dress plaid, banquet plaid, holiday plaid, hunting plaid, funeral plaid and other plaids for different occasions... An empire's history of civilization is easily declared by such soft and gentle cloth for people to worship, shining through the ages. Today is the fast-moving consuming age, people still run after their need and belief for formatting business. Formatting is the autosomal dominant gene of plaid. Plaid suddenly becomes the totem of social symbol. We engrave the plaids in the outer layer of skin lightly in social game and implant dye deeply into the corium layer of spirit as the tattoo is never erased so that we have to believe that it is our birthmark of life, cherishing and loving it from the beginning.

The motif is old and profound. Other artistic expressions like psychedelic rock Pink Floyd's "The Wall" or film "The Shawshank Redemption" have related references. Power and will, humanity and paranoid, survival and fight, individual consciousness and collective unconsciousness stay at the eternal formatting from ancient times. Apparently to artworks, annotation and interpretation are conceited and needless. Compared with the "form is content" art, words are sometimes weak. Writing till now, I suddenly realize these characters seem like that an individual "me" vainly attempts to format Zhang Bojun's "We" into mosaic. It likely leads to another anxiety. We might as well only watch the works, being formatted by the works. Because absurd heroes Sisyphus know that even they are both the master and slave of life, they are harder than the rocks in front.