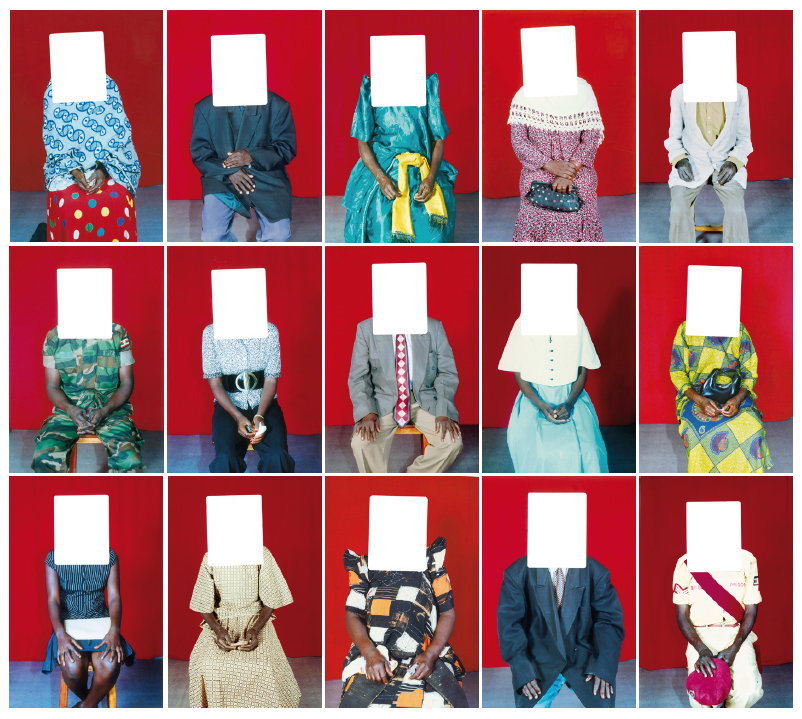 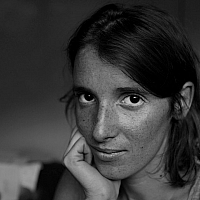 In January 2011, while waiting for her own photographs to be printed at the Gulu Real Art Studio, Bacigalupo encountered an unusual object: an otherwise normal portrait, but with a void where the sitter’s face should be. When she asked Obal Denis, Gulu’s studio photographer, about the cut-out face, he explained that his standard ID photo equipment could only make four prints at a time. If clients wanted just one ID photo, it was easier to take a single large portrait and cut the picture down to show only the face. The rest of the print would be discarded, just as Bacigalupo found it. Having become fascinated by these leftover photographic artifacts, Bacigalupo began to collect the faceless prints.

Such identity portraits are crucial for the citizens of strife-torn Gulu, where more than half the population has been displaced by conflict. People in Gulu need to have their picture taken for various reasons, both personal and bureaucratic, but most often for ID cards and applications. Edited from hundreds of discarded images, Bacigalupo’s collection represents a typological cross-section of Gulu’s society today: nurses, soldiers, farmers, teachers, businessmen, nuns, students, mothers, children, the young and the old.

These typological distinctions are established in the leftover prints from Gulu Real Art Studio through pose, clothing, and self-definition. Vivid and diverse, the images extend the tradition of vernacular studio portraiture in Africa. At the same time, since they are devoid of individual faces, they are completely unlike conventional portraits. The cut-outs heighten the viewer’s attention to gesture and detail: the recurring blue jacket, for example, which is required to be worn by all account applicants to Barclays Bank. And it is through these subtle details that other markers of identity slowly become visible.

Bacigalupo later returned to Gulu to interview customers of the studio, which will be presented in audio and video as part of the exhibition. The resulting narratives and compelling storytelling illustrate life in the town and the resilience of its community during the recent wars in East Africa. The images Bacigalupo discovered, together with her interviews, are also collected in the new monograph Gulu Real Art Studio, published by The Walther Collection and Steidl. To be released on the occasion of the exhibition, Gulu Real Art Studio also features essays by Martina Bacigalupo and Sandrine Perrot.

Martina Bacigalupo was born in Genoa, Italy, in 1978. Currently based in Burundi, East Africa, her work has been published in the The New York Times Magazine, London Sunday Times Magazine, Le Monde Magazine, Internazionale, Elle, Esquire, and Jeune Afrique. Bacigalupo is a member of Agence Vu in Paris.