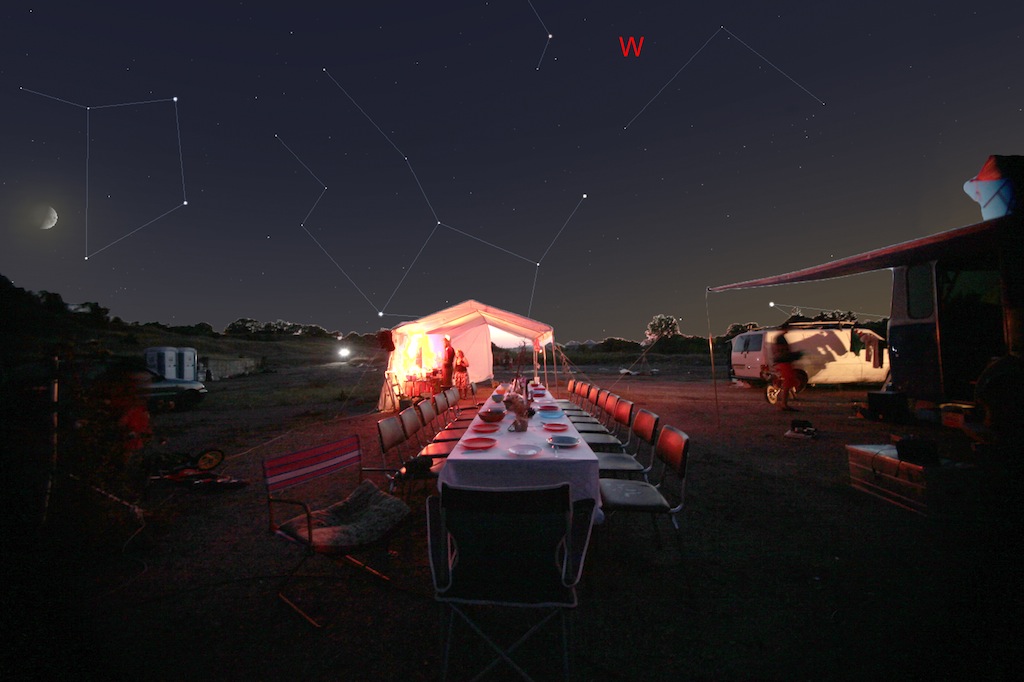 Alongside excessive communication, inordinate mobility is one of the determining factors among the global phenomena of the early twenty-first century. As part of this year’s main focus, the Fotogalerie Wien is showing artworks concerned with the manifold aspects of this subject from differing viewpoints. The three-part series of exhibitions contains positions relating to the interwoven fields of voluntary travelling, borders and border areas and the volatile flows of capital and information with their physical consequences affecting many people. The curatorial team has developed each part of this trilogy together with the artists in an open process, and in so doing set off on a trip that often contains surprising discoveries. The interaction of the various works produces a dialogue that repeatedly renders new moments visible and makes it possible to point up the multi-levelled nature of the subject of mobility. To approach this through the medium of images can also be read as a characteristic of globalization because images are among its most mobile entities that long ago began to ignore all borders whatsoever.

The first exhibition in the series, TRAVELLING, is devoted to various kinds of voluntary movement, the motivating desire to be elsewhere and the settings that were found or created there. The Fotogalerie Wien has invited five artists who are concerned with the subjects of mass tourism, artists’ journeys and virtual travelling. In the first case to be “on the move” all too often means to go to distant realms without actually being there, in fact to even prefer being insulated from local events, swaddled in the cocoon of a custom built resort or adventure holiday strategy. Artists’ trips, the second focal point of this show,  are guided by another star. Their travels are often infused with curiosity and a desire to experience what is different and to aesthetically reflect on it in their work. Another aspect is the excursion into cyberspace where the use of keyboard and mouse releases the imagination from its habitual surroundings even though it still runs into predetermined behavioural patterns. 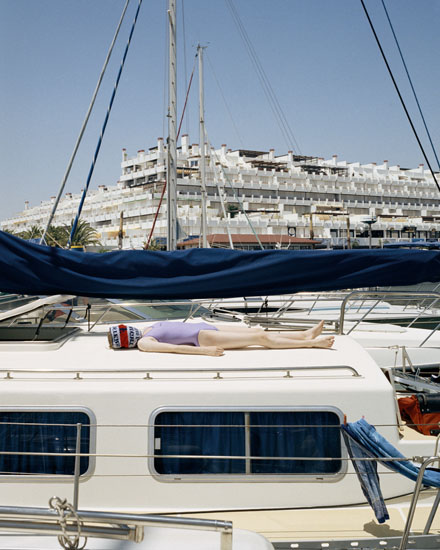 
In her series Portobello  Patrícia Almeida, born in 1970 and a resident of Lisbon, staged places, people and scenes in the context of mass tourism: illusory worlds under a bright blue sky that allow one to escape everyday life. The title stands as a synonym for interchangeable tourist resorts which are located anywhere in the world. To allow oneself to be caught up in mass entertainment events, to relax or just to let your hair down usually takes place completely uncoupled from the real actual situation in situ and sealed off from what is in fact unfamiliar and foreign. The artist shows many facets of the phenomenon of mass tourism. These are not snapshots but, rather, the places, portraits of tourists or those employed in tourism, entertainment and consumer services, are precisely documented, in re-enacted scenes and woven together in an installative setting. By doing so she has been successful in catching the authentic and the inauthentic, and making the purely artificial nature of these experiential worlds visible on another level.


Robert F. Hammerstiel was born in 1957 in Pottschach and lives in Vienna. The works being presented by the Fotogalerie Wien are an excursion into the cosmos of cyberspace, into a “Second Life” respectively into the world of the online platform of the same name. He doesn’t only give us insight into the visual and aesthetic evocative force of virtual experiential world with its endless sandy beaches or sun-drenched, palm-lined boulevards that have a distinct similarity to the “dream destinations” of real travels, but also documents the motives of the people who go there. The Instant Vacation I series consists of deserted pictures with statements by users articulating their wishes. The video Instant Vacation II, provides insight into the construction mechanisms which give rise to these virtual worlds, and in Instant Message I and II the viewer becomes the silent observer of a user chat centred on the experiences and freedoms of “Second Life”. The video work Pose Balls documents the standardized procedures of intimate encounters between avatars as they are predetermined by the programme. It becomes clear that the cyber-mobility enabling an escape from everyday life takes place in preset patterns – just as it does in (physical) mass tourism.

With his Outpost of Progress Michael Höpfner,  born in 1972 in Krems and a Vienna resident, leads us into border territories where people who live within long-established traditions encounter outposts of civilization. In the process he successfully counteracts any exotic imaginings about untouched nature and people who live in complete harmony with it by showing pictures of the real, on-the-ground situation. During his long journey on foot over the Chang Tang Plateau in Western Tibet – a region where the people were originally nomadic – ­the artist encounters organized work camps and endless motorways. The black and white photos made here show roads straight as arrows. They cut into the wilderness, an infrastructural manifesto of modernization, but also show signs of unravelling at their edges, of returning to nature. The artist will confront the photos with an installation made specially for the exhibition. Constructed from rusty iron, it recreates the hybrid habitation of the tent and single family home structures hurriedly erected by incoming migratory workers. In his reaction as an artist Höpfner never conceals his Western gaze. Walking as a way of travelling can be read as resistance to global capitalism and as an anarchistic attempt to avoid the dictatorship of speed in order to achieve another form of perception. 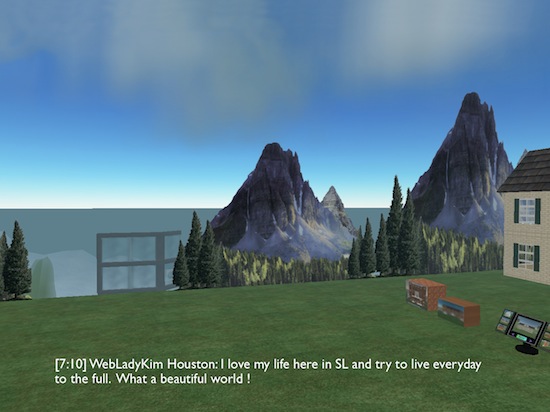 Klaus Mähring was born in 1975 in Graz and, since 2001 lives six months a year “on the road” and six months in Vienna. Travelling is a way of life for him and this is mirrored in his work. As a nomadic artist he works with what he finds and develops while travelling. He travels with a van which serves as a living space, home, studio, photo laboratory and exhibition space all at the same time. Its presence is enough on its own to act as a draw for people from the surrounding area. When, as “Captain Klaus” he is the leader of the Nomadic Village, his vehicle mutates into a town hall around which the fleet of vehicles and the infrastructure of the small community arrange themselves. In the process a significant motive is to assume the right to use and to re-conquer public spaces. The Fotogalerie Wien will be screening two videos in the cinema that document the arrival in, and engaging with, new places as well as works from the Nomadic Village Travelling Exhibition series made during this project. The artist will be regularly present throughout the exhibition as a story teller (with coffee and cake).


With Hearsay, Tim Sharp, born in 1947 in Scotland and a Vienna resident since 1978, reacts to a travel agents congress and the circumstances surrounding it in San Cristobal de las Casas, Chiapas, Mexico. For the event the city centre was extensively cleaned up and underwent intense repainting. The paradox is that “adventure tourism” here does not mean discovering what is different and foreign, but is more concerned with profit, political power and land. During the event a market which provides the livelihood for many indigenous people was closed down, and as “compensation”, mestizos or mannequins dressed in traditional clothing were to be found at the travel agents’ fair tent. As a stop gap measure to provide at least some income from selling their souvenirs, stallholders were forced into renting the facades and doors of permanent shops nearby. Sharp brings together photos and fragments of dialogues heard around town into a large-format tableau that documents the event. This method is reminiscent of newspaper articles and, as a direct wall-based work, also reflects on one of the significant functions of walls: who has the right to broadcast which messages?.