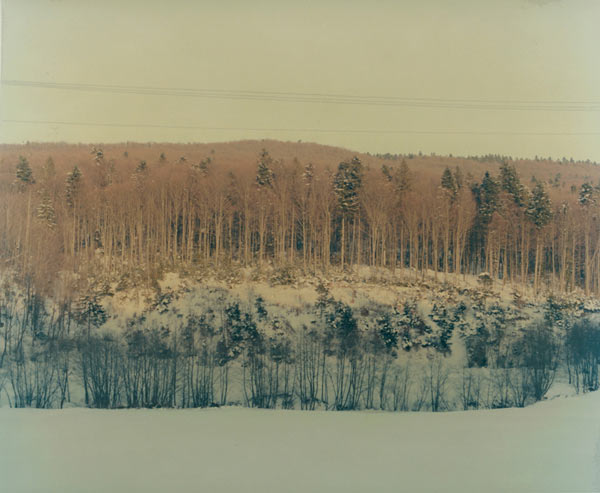 This exhibition premieres both a new film The Forest, commissioned by Film and Video Umbrella in association with The Photographers' Gallery, and series of photographs titled Liquidation by the Israeli born, British based artist Ori Gersht. As with his previous work, the genesis for this project was Gersht's interest in exploring landscapes embedded with both personal and historic resonance. The forest in question surrounds Kolomyia & Kosov, Ukraine, and is a remaining fragment of the once vast primeval forest that covered much of continental Europe. Much mythologised and idealised in the period of the Enlightenment, epitomised in the German Romantic artist Caspar David Friedrich's paintings, the area was to bear witness to appalling atrocities during World War II. As Simon Schama relates, theforest and its environs was: “chewed up by war and fertilised by the bones and blood of the unnumbered dead”. (1) Ori Gersht's connection to the region is that his relatives were to find brief and harsh haven here from Nazi persecution. The film is made deep in this forest, in what initially appears to be a sylvan idyll bathed in dappled pools of light. However, as the film evolves, a number of trees start to fall mysteriously in front of the camera, crashing down to earth in an overwhelming cacophony of breaking timbers and branches. Afterwards silence and tranquillity return as if the act of destruction had not happened at all. Many of the new photographs, taken primarily of the landscape around the forest, have an almost fluid and bleached out appearance. Through long exposure, and capturing images whilst moving, the end results are photographs with only isolated recognisable features of houses and trees. As with the film, the work grapples with the pictorial and superficial beauty of this area and darker horrors of its past that reside in this past of Eastern Europe. A new book "The Clearing" by Ori Gersht is published by Film and Video Umbrella to coincide with this exhibition. It is available as hardback, 96pp and full colourillustrations, priced £18.99 (ISBN 1 90427 021 2) and available from bookshop at The Photographers' Gallery. The catalogue is published by Film and Video Umbrella withsupport from Arts Council England. With additional thanks to CRG Gallery, New York, Angles Gallery, Los Angeles, Noga Gallery, Tel Aviv and Andrew Mummery Gallery,London. The film is commissioned by Film and Video Umbrella in association with The Photographers' Gallery, with support from Arts Council England. With additionalthanks to CRG Gallery, New York, Angles Gallery, Los Angeles and Noga Gallery, Tel Aviv. (1) Simon Schama, Landscape and Memory p18 This exhibition is curated by Camilla Brown (née Jackson), Senior Curator at The Photographers' Gallery. LongForest - Liquidation, 2005 Courtesy Andrew Mummery Gallery © Ori Gersht