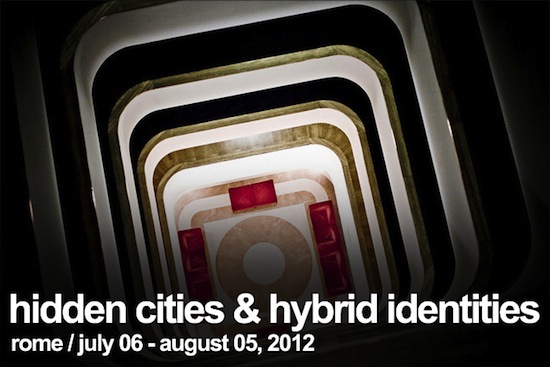 Hidden Cities & Hybrid Identities, an international videoart festival and photography exhibition, will be held in the city of Rome. The Ripa Hotel & Riparte Cafè, the venue of the event, will open its doors on Friday, July 06th until Sunday, July 08th. Forty-two artists, twenty-seven video artists and fifteen photo artists from different countries have been selected to be part of this project.

The selections has been based on the main concept of “Hidden Cities & Hybrid Identities” that analyses the hybridization of physical and social identities in the contemporary cities. The theme is about all the cities and places around the world.

« The colors of the hidden cities with his hybrid Identities merge: the day and the night, the neon light that illuminates the facades, the patchwork of contaminations, the passers, layers from top the bottom, undergrounds, built geometric shapes in which to play and invent memories. The urban landscape, and his human bodies, is not only formally captured but also perceptually. Its dynamics and features: into excess, in the immobile, or in the unfinished. Migrations and transformations are self generated in these cities. We can see them as voracious bodies which reconstruct utopias. Seductive idiosyncrasies in which the imitation, the repetition, the symbol and the sublime are connected to the estrangement of modern alienation. Image yourself in these streets, between the blocks and the buildings, portrayed as an unexpected passer by of the filmic flow of an unstable and polymorphic scenery ». Camilla Boemio, 2012

Hidden Cities are the first point analysis of this talk. With the screening of Luisa Zanzani’s video. The photographic serie “Adria” presents, in a pure documentary genre, a province which has never been so well narrated. The absence of man is the hallmark of the documentary genre.

International ArtExpo is a not for profit organization that provides a significant forum for cultural dialogue between all artists from different cultures and countries. We depend on the support of you. ArtExpo is grateful to all of the institutions, corporations, and individuals who support our efforts. We work with a number of national and international galleries as well as publishers, museums, curators and writers from all over the world. We help artists through solo and group exhibitions, gallery representation, magazine reviews and advertisements, press releases, internet promotion, as well as various curatorial projects.