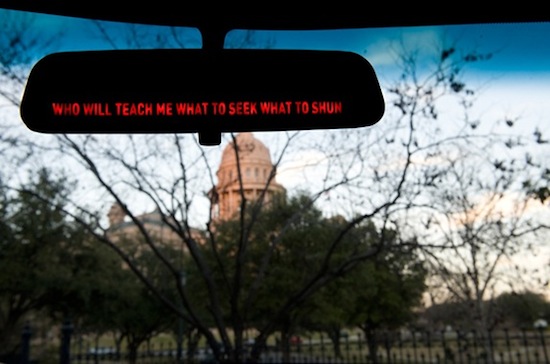 Failed States is an exploration of coincidence and poetics amid the barriers and bureaucracy of governmental power.

In January 2010, while on a trip to research the history of snipers in Austin, Texas, Magid witnessed a mysterious shooting on the steps of the State Capitol. After attempting to speak with a state employee a young man named Fausto Cardenas exited the building and—in full view of security—fired six shots from a small caliber gun into the Texas sky. Cardenas has offered no explanation for his actions. Last August, after eighteen months of incarceration, he took a plea bargain, ultimately silencing himself.

In Failed States, Magid acts as eyewitness and dramaturge, drawing connections between Fausto's futile and tragic act and Goethe's nineteenth-century epic poem, Faust. Magid portrays Fausto as the tragic hero, guiding the relationship between the lone gunman and the famed literary protagonist to a histrionic effect. Failed States investigates Fausto's abstract, almost surrealist, act as it is chronicled through an intermingling of personal and public, fact and fiction, words and actions.

Faust was originally written as a "closet drama," a play to be read rather than performed. In the installation Failed States, the script is slowly unveiled through stage directions, prints, audio, photographs, news reports, and a live feed from the sky above the Capitol steps. The exhibition will feature Failed States—the work from which this exhibition takes its name—Magid's 1993 Mercedes Benz station wagon. This car was originally purchased as Magid's family car and has been subsequently armored to withstand gunfire common in war zones. While following Fausto's case, Magid was training to be an embedded reporter in Afghanistan and learned about the "hard cars" or armored vehicles (usually Mercedes) designed to blend into local traffic. For a previous exhibition, this car was parked on the site where Fausto Cardenas had parked his car before approaching the Capitol in Austin. For her exhibition with Honor Fraser Gallery, Magid brings the car inside the gallery, embedding herself further into the drama.


Jill Magid is an artist and writer who infiltrates structures of authority and power by engaging their human side. Rather than treating these structures as subjects to challenge, she creates opportunities to draw them closer. Through dialogues and manipulations Magid finds her way in through introduction or invitation, often locating or exploiting a loophole in the system.