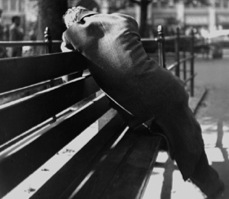 Virtuoso of the Leica, Fred Stein is a largely unsung master of a generation of photographers whose talents were swept across Europe by the dark geopolitical events of the 1930s and 1940s, only to land in the safe haven of New York.

Captured with verve and wit, an eye for the poignant as well as the surprising, Stein's images of the urban life and iconic portraits of the luminaries of the 20th century are ripe for rediscovery. With a selection of vintage prints spanning over three decades, Fred Stein: Paris / New York will introduce 21st century audiences to the range of the photographer's work.

Born in Dresden, Stein and his wife immigrated to Paris in 1933 under the pressure of increasingly untenable conditions in Germany and his being unable to pursue his career as a lawyer. It was in the French capital that Stein realized his vocation as a photographer. Taking to the streets of Paris with a Leica that the couple bought for each other as a joint wedding present, Stein made images steeped in the poetry of the city - every bit the equal of his contemporaries Henri Cartier-Bresson, Ilse Bing, and André Kertész.

Whether depicting a lonely figure along the quays of the Seine or the abstract plays of light on a cobblestoned intersection filtered through the "new vision" of the era, the photographs from the 1930s show how sensitively attuned Stein was to the rhythms of the metropolis. Displaying both the isolation of those down on their luck as well as moments of spontaneous warmth and community, Stein's humanistic outlook found initial expression in the intellectually rich milieu of pre-war France. 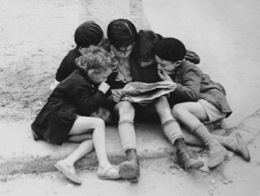 
Such inclinations would go on to serve Stein well in New York, where his talents as a documentarian found a place with the Photo League. Having escaped an internment camp for enemy aliens in wartime France and miraculously reuniting with his family in Marseille, in 1941 Stein found passage on a steamer bound for the United States.

There he built a successful studio practice specializing in portraiture, while also continuing his independent work in the streets of the city. Stein's characteristic humor and sympathy manifested in photos infused with an increasingly sophisticated approach to the atmospherics of lighting and tonality. As befits a professional portraitist, Stein relentlessly sought to the capture the human face of his time.

The photographs of Fred Stein (1909-1967) were extensively published in the illustrated magazines, newspapers, and books of his time. This is the first solo exhibition of Stein's work at Robert Mann Gallery since the gallery began representing the estate last year. Last fall the Musée du Montparnasse in Paris exhibited a selection of his portraits of exiled artists and intellectuals; an accompanying catalogue of works was also published on the occasion.

Stein's photographs are represented in the collections of the International Center of Photography, New York; the Center for Creative Photography, Tucson; the Jewish Museum, New York; the Smithsonian American Art Museum and the National Portrait Gallery, Washington, D.C.; and the Musée Carnavalet, Paris.