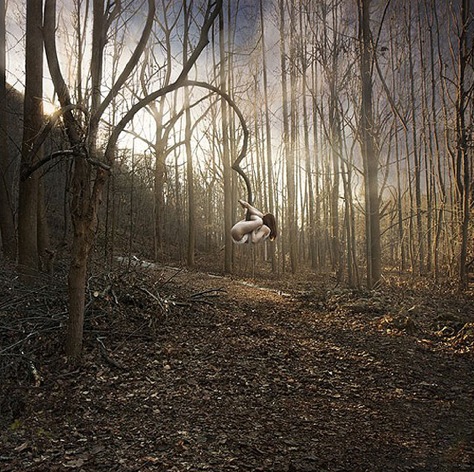 In her new body of work, Haley Jane Samuelson distinctly shifts from her introspective self-portraits in the interior to portraits of others in sweeping, lush outdoor settings. Scenes are overflowing with magic hour light, rushes of texture and saturated, jewel tone color that take her photographs to a level so rich that the desire is to speak of them on painterly terms. Taking this step into nature's beauty and away from the stylized realities she constructed, elevates the depth of her work. In an image such as Quiet, being what I remember, except for the crisp, dark sound of the leaves being pulled back into the earth the cascading and effervescent light infuses the scene with a gentleness fresh to her palette. The still quietness is an example of the poignant turnabout when compared to a piece like Yawn Scream that was the anchor of her last body of work. There still remains a tension in the subject, but we are closer to an awakening from the coccoon of self analysis. Furthermore, in these pieces, the work stems from the environment, rather than the environment and end result being dictated by a concept. Thus, Samuelson is challenged to capture a natural dialog happening on all levels and one which she cannot control.

Subjects gesticulate in dramatic, spontaneous ways that Samuelson advised were born out of conversation that unfolded in her journeys to and from locations.

Sexuality, anger, love, death, beauty and fear displayed shamelessly and without self-awareness was awakened before her lens as true, raw inner monologues were exposed and a sense of propriety became foreign. In these photographs, it all comes pouring, out all of the time. The freedom in this communion between artist and subject, woman to woman allowed for a physical release of the subject into the world with them reeling from the high of emotional nudity to move and sway as they never would have otherwise. It also brought Samuelson to a place to capture them in uncontemplated, organic ways whose beauty lies in their pureness as both she and her subjects ride the wave down to a place of calmness and simple being. Samuelson could relate to and see pieces of every woman she knows as well as herself within her subjects. This collective unconsciousness is articulated in her composition. She found the moments she was capturing fell into that area of being which is neither past, present nor future, but all that lies between.