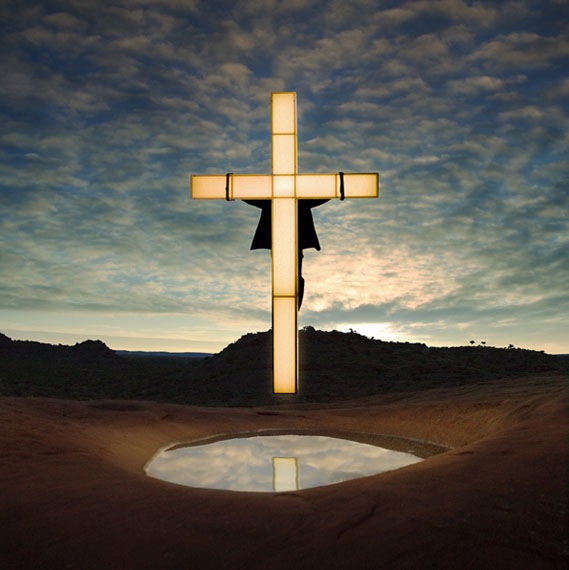 «When I grow up I want to be just like Jesus.» (Warwick Thornton, aged 6)

Warwick Thornton is a Kaytej man whose customary lands reside to the north of Alice Springs where he has lived the majority of his life. A film-maker of singularly distinctive vision, his first feature Samson and Delilah (2009) took the national and international film world by storm, winning numerous awards including the Caméra d’Or at the 2009 Cannes Film Festival. It continues to challenge, confront and seduce audiences with its visceral depiction of damaged young romance in truly dysfunctional settings of time and place.

Stranded, Thornton’s foray into creating artwork for a gallery space was commissioned by the 2011 BigPond Adelaide Film Festival through its investment fund. It premiered at the festival in Stop(the)Gap, a major international Indigenous moving image project curated by Brenda L Croft for the Samstag Museum of Art. Stills Gallery is proud to premiere in Sydney the 3D screening of Stranded and a series of photographic works inspired by the video.

The video features Thornton «as the central Christ-like figure – dead centre, if you like – with the unexpected addition of a skull and crossbones. Thornton’s figure revolves in space above a mirrored waterhole in the brilliant harshness of the broken heartland, heightened by the unnerving sounds of wide open spaces – the chirruping of native birds, the ubiquitous blowfly buzz, the whoomp-ing sensation of windmill...or wind turbine? Dream(ing) or nightmare, or both?»
Brenda L Croft 2011 Stop (the) Gap catalogue essay

The depiction of Thornton as Christ is at once melodramatic and subversive. He draws on certain cinematic conventions — the epic desert landscape as setting, the use of sound to heighten an emotional response, the high-tech 3D technology usually prevalent in blockbuster films — but provides no narrative resolution. In the similarly cinematic still images that accompany the video his crucified figure appears over desert, lake and city-scapes suggesting a Christ-like ubiquity, however in both video and photographic works, his deliberate open-endedness asks viewers to form their own assumptions. At one point in Stranded, for example, Thornton yawns on his cross. What are we to make of his boredom? 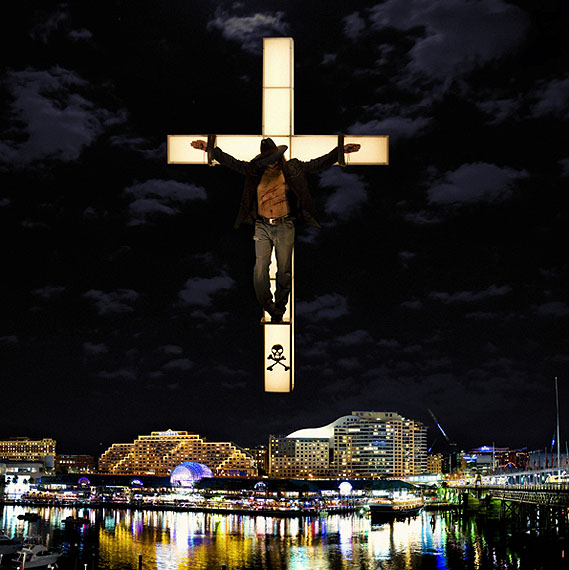 «We are (also) possibly witnessing a representation of a ‘lost’ Aboriginal generation, Thornton’s own, no longer under missionary control, yet still nailed to the cross, detached and hovering above the Land. Perhaps in Stranded we encounter another ‘muddying of the waters:’ art that worries at the line between Indigenous and non-indigenous, elusively pushing beyond established concepts.»
Tom Redwood – RealTime issue #102 April-May 2011 pg.23