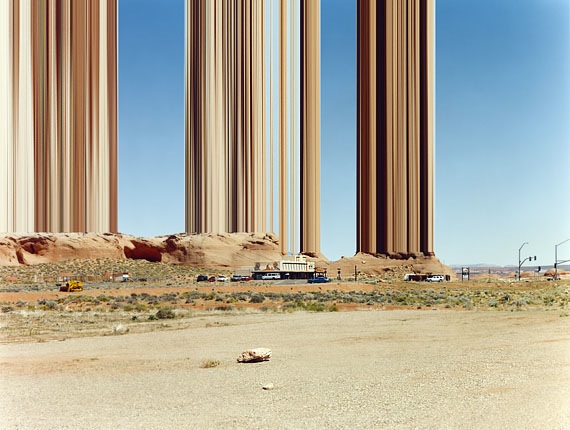 Ralf Brueck is a german art photographer who transforms a mere photo into an autonomous individual work of art. The visual and conceptual potential of an image is thereby exhaustless and the task of sounding yet undiscovered possibilities in the field of photography, often stimulated by technical development, is a topic artists commonly deal with. Along with his interest in deducing innovative forms of depiction and his specific photographic staging Ralf Brueck systematically questions the nature of photography concerning its representation of reality.

The term Distortion means deformation or a shift of structures created by powerful impact. Interpreting this differently, in terms of Brueck´s works one can speak of ”Ruining” the picture itself. The ruthlessness of this formula is generic for the severely manipulating pictorial intervention and the consequent dynamics. The formal result of this particular intervention reminds oneself of a Barcode that represents the DNA of the picture.

Impressive sceneries such as forests and deserts as well as singular architectural fragments are displaying a depicted reality. Its graphic quality however, is not acting alone on the pictorial surface. It is being deconstructed by the artistic intervention of digital manipulation:
Based on their colour, tree trunks and rocks are distorted into bundles of coloured stripes. With their horizontal and vertical lines the Barcodes obtain geometric effects which create friction upon the layer of the picture. A new type of shape emerges from the elongation and widening of the image information which strikingly emphasizes the monumentality of the scenery.

By his highly calculated composition and original use of Barcode forms Ralf Brueck, accomplishes a recognizable contribution to the quest for the productiveness regarding the photographic thesis on the construction of pictures and the world itself.

Ralf Brueck has studied with Bernd Becher and conducted his diploma with Thomas Ruff at the Academy of Arts Duesseldorf. Since 2001 the Duesseldorf based artist has received several awards. The exhibition Distortion is his second solo show at Galerie Muelhaupt, Cologne, Germany.