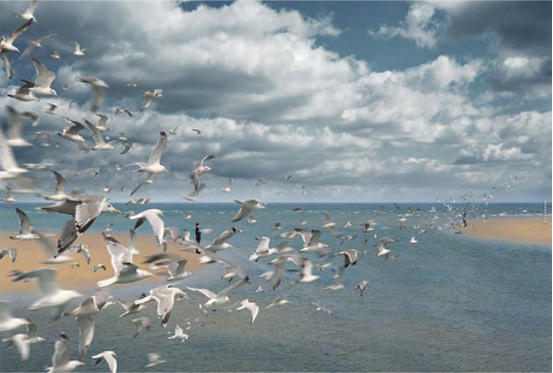 “Endless guessing, endless interruption, and endless memory; I don?t know from which period of stillness to start once more, and from this start how to return to stillness again. Living in a mood, is it from yesterday or today? Many things pass by me, some are still vivid, while some are merely traces. Mood is never better than memory.“ Chi Peng
The “Mood and Memory” exhibition presents the latest body of work by internationally renowned artist Chi Peng (b. 1981) titled “Mood Is Never Better Than Memory”, as well as a selection of his most recognized works from the last several years, including “Catcher” and “19.June.1981”.


In a suite of five large-format panoramic photographs, “Mood Is Never Better Than Memory” presents a surrealistic seascape of the artist's hometown, Yantai, Shandong Province, China. Sky, water and seabirds as well as Chi Peng’s alter-ego character give the viewer clues to the artist’s intended narrative: illusive love, fleeting emotion, happiness in memory, solitude, finding one's inner peace. Through masterfully composed scenes, Chi Peng explores once more themes of identity, isolation and freedom and a desire to evoke with images a certain fleeting mood faded by the passing of time. In the two “Catcher” panoramas based on J.D. Salinger’s “The Catcher in the Rye”, Chi places in one a host of children in a wheat field marching toward their future and, tellingly, scarecrows in the other.
Chi Peng (b. 1981) was born in Shandong Province, China, and graduated in 2005 from the Digital Media Department of the Central Academy of Fine Arts in Beijing. His works have been exhibited in major museums and art institutions around the world, including a solo exhibition at the Groninger Museum in the Netherlands currently on view. Other institutions that have exhibited Chi Peng’s works are the Pompidou Center in Paris, Ludwig Museum in Budapest, Palais des Beaux-Arts in Brussels, COBRA MUSEUM in Amsterdam, the Museum of Contemporary Canadian Art, and the National Museum of Modern Art in Seoul. He currently lives and works in Beijing.