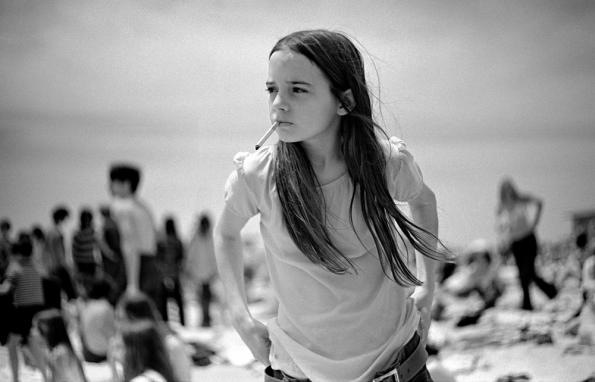 Jones beach : Teaching high school in suburban Long Island from 1972-1999 has given photographer Joseph Szabo a front row seat on the fascinating rites and rituals in the life of the American teenager. «My general rule was no drugs and no sex but right on with rock'n'roll» says Szabo. Necking, smoking, hanging out and preening for the camera, the insolent, vulnerable, aggressive, lonely kids captured in Szabo's sexy, intimate black and white series Jones Beach testify to the complex, often contradictory nature of that time of life. Szabo captures the bravado, but also the haunting vulnerability and insecurity of teenagers. Photographing the students in their bedrooms, at school dances, in the classroom or cruising in their cars was initially a way for Szabo to get to know his unruly high school photography students. «I became a better teacher because I was tuned into their lives» says Szabo. By turning the lens on his students he captured their attention and won worldwide recognition from fans including Sofia Coppola (who used his images as an important visual reference in her 1999 debut film The Virgin Suicides), and the adoration of the fashion crowd including Juergen Teller, Terry Richardson and Bruce Weber. Early on Szabo took the advice of famed photojournalist Cornell Capa that «you have to like people and you have to let them know you like them.» Szabo's exceptional tenderness in penetrating other worlds and capturing the sublime in the seemingly ordinary has extended to his other projects documenting the crowds at one of the busiest beaches in the world, Long Island's Jones Beach and a project documenting Long Island's terminally ill.
Szabo's work has been exhibited at the Venice Biennial, the International Center of Photography and the Museum of Modern Art. His work is in the collections of the Metropolitan Museum of Art, the Brooklyn Museum, MoMA and the San Francisco Museum of Art, among many others. His photographs have been published in The New York Times, The New Yorker, the Los Angeles Times, Dazed and Confused magazine and Women's Wear Daily and exhibited at galleries in Paris, London, Japan and New York. 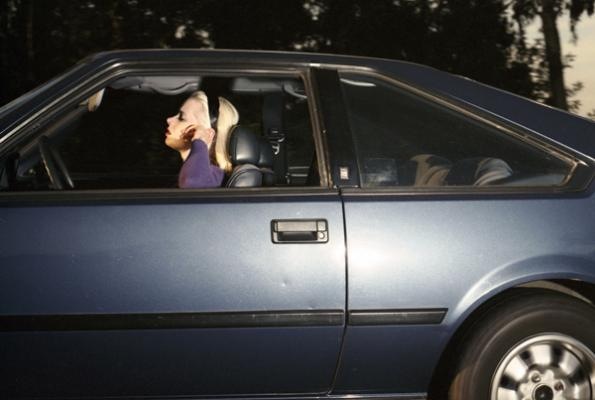 
Drive : The automobile is the subject of Los Angeles-based photographer Andrew Bush's hypnotic chromogenic photographs of that most beloved of American objects. In his celebrated series of mobile portraiture Vector Portraits, Bush documents the car culture of Southern California and of middle America too: Camaros, Impalas, Trans Ams, Porsches and VW Beetles and the drivers who express their personality through the cars they drive. In this strange limbo space, both public and private, Bush captures the inherent mystery and fascination of other people. The evocative work has been compared to Walker Evans' classic, equally voyeuristic photographs of New York City subway riders from 1938-1941. Using a medium format camera on a tripod both placed in the passenger's seat and a strobe light for a flash, Bush's photos are guerrilla chronicles of people in the midst of driving (and often unaware they are being photographed) down the highway. Bush records the diversity of people and the cars that contain them in a highly narrative, seductive style that suggests film stills: an African American family in a tomato red Cadillac, a tattooed mustached macho man in a yellow Camaro, a Barbie-like woman in a hot pink car. Created from 1989 to 1991, Vector Portraits shows how intimately American self-identification is tied up with the automobile. He renders his drivers with a blend of voyeuristic fascination: quirkiness, comedy and sometimes even despair are all present, depending upon the attitude of the driver. The title for the series comes from the dual meaning of vector, as an agent that contains or carries and the physics concept of the distance between point A and point B. «Cars represent many things» says Bush «style, fetish, and will always be an index of social status. If I see someone driving a Bugatti Veyron I am curious—I want to see who is driving that million-dollar car.»
Bush's work has shown alongside some of the most revered photographs of our age including Larry Sultan and Philip-Lorca diCorcia. His work is included in many prominent collections including the Museum of Modern Art, the Whitney Museum of American Art, the Art Institute of Chicago and the Museum of Fine Arts, Houston. His Vector Portraits were assembled in a 2008 Yale University Press book Drive. 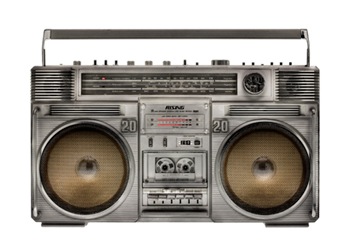 
The Bloombox Project : A smart and provocative piece of cultural anthropology, Lyle Owerko's The Boombox Project, is a celebration of that quintessential big city accessory perched on shoulders or ornamenting front stoops, the icon of the punk, new wave and hip hops movements from the 1970s to the ?80s. With his celebrated Abrams Image book of the same name The Boombox Project: The Machines, the Music and the Urban Underground (featuring a forward from filmmaker Spike Lee, who immortalized the boombox in 1989's Do the Right Thing) Owerko has brought the youth culture of the city streets into the gallery space. His work “venerates an audio technology that, to eyes accustomed to the iPod's futuristic smoothness, seems practically steam punk” according to The New York Times. Owerko's captivatingly detailed photographs of the stylistic range of these “ghetto blasters” celebrate this distinctive American cultural touchstone. The boomboxes

Owerko documents are drawn from the artist's extensive collection of the vintage jam boxes before they were downsized and rendered incongruous with current technological tastes from CDs to MP3s. But Owerko's photographs also offer a fascinating archive of the architecture of these music machines, not unlike Bernd and Hilla Becher's classic portraits of Germany's industrial architecture. «They're objects of desire and reverence» says Owerko.

A renowned New York City-based photographer, filmmaker and self-professed «pop- culture junkie» Owerko's editorial and fine art projects regularly take the globe-trotting artist to Africa, Tokyo, Los Angeles, Mongolia and Central America. His heart-wrenching editorial photograph of the Sept. 11, 2001 attack on the World Trade Center appeared on the cover of Time magazine and was called one of the 40 most important magazine covers in the last 40 years by the American Society of Magazine Editors. His film credits include music videos for Rufus Wainwright and American Hi-Fi and commercial spots with Robert Redford for The Sundance Channel. His work has been featured in Communication Arts magazine, The New York Times, The Village Voice, New York magazine, BlackBook and on NPR. His journals have been included alongside those of director Mike Figgis and musician David Byrne in the 2005 Princeton Architectural Press book Drawing From Life.