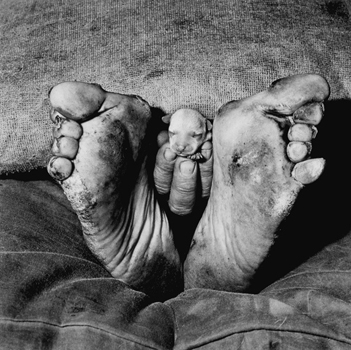 Roger Ballen is one of the most important photographers of his generation. He was born in New York City in 1950 but has lived and worked in Johannesburg, South Africa, for over thirty years. In his work from 1982 to 1994, Ballen trained his camera on the white population living in the hinterland. He has gained world fame with his penetrating photos recording the daily environment of these people on the margins of South African society. In his most recent photos, the human figure has become less central to the composition, and Ballen explores the darker depths of human existence—the 'skadukant' in Afrikaans.

As the son of a photo-editor at the Magnum photography agency, Roger Ballen was an autodidact who started taking photographs at an early age. He originally focused on civil rights activists and anti-Vietnam protesters and took photographs during trips around the world that lasted several years. He studied psychology and mineral economics. In 1982, he established himself as a mining entrepreneur in Johannesburg. Prospecting for mineral deposits, Ballen found himself in remote areas. It is here that he began to take photographs of South African villages ('dorps'), as well as their inhabitants. He published these photos in his books Dorps and Platteland, establishing his reputation as a photographer. From the late 1990s, photography took precedence over Ballen's activities as a mining entrepreneur.

After finishing his book Platteland in 1994, Ballen developed a unique and highly participatory style of photography which became increasingly removed from the documentary photography in the style of Magnum photojournalism with which he started his career. Together with the inhabitants that he sought out—ranging from poor workers to witchdoctors and criminals hiding from the law—he started to create complex visual scenes, integrating objects he found on location, wall drawings, animals and people. The photos, which are the result of these unusual collaborations produce a strongly psychological resonance and give a harrowing view of humanity. As mixtures of photography, performance, assemblage, installation art, and drawing, these works go beyond the medium of photography. They are reminiscent of the disturbing dreams of Surrealism and Art Brut.

The exhibition features roughly 120 photos which, together, give a sense of the evolution of Ballen's work from the beginning of the 1980s to today. There is a selection from his early documentary series, along with photos from the more recent series Outland, Shadow Chamber and Boarding House. In addition, the exhibition will provide the first glimpses of Ballen's most recent photo-series-in-progress in which birds are featured in all the photographs.

Also, for the first time, Ballen will stage some of his photos in a special in situ installation of his own design at Het Domein. In doing so, he will fulfill a long-held wish. Using materials collected in Johannesburg and Sittard, he will create an unforgettable three-dimensional environment following the same principles by which he constructs his photos.

On Sunday, May 8, at 2 p.m., Roger Ballen will give a talk on his work at the Museum Het Domein. He will be available afterwards for a book signing. Reservations recommended: www.hetdomein.nl.