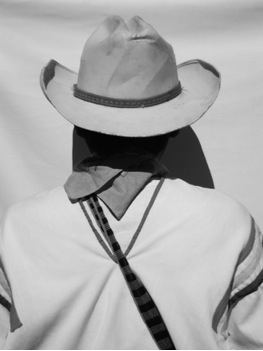 In Cady Noland and Santiago Sierra, we are bringing two artists together who regard social violence not as a departure from social normality but as an expression of the normative form of rule and economic system we all implicitly support: capitalism and liberalism. That has not always made their art easily digestible to the public. In the 1980s, Noland provoked observers by denouncing the myth of the self-determination of US-Americans and their love of freedom as an imperialist gesture. Sierra was accused of criticizing the humiliating instruments of capitalist domination by merely mirroring them in his own artistic practice, effectively turning the victims of social violence into victims also of his art and inflicting a second humiliation on them. Yet we believe that both descriptions are overly simple. We hope to show that Sierra as well as Noland hit a deeper neuralgic spot of social conditioning: a moralistic mask concealing social repression.

Noland's oeuvre has recapitulated the violent history of white America: the historic land grab and westward expansion (we are showing the Log Cabin, 1990), the architectures of social exclusion (Metal Fence, Frame Device, 1990), the aggressive media industry of our day (Enquirer Page with Eyes Cut Out, 1990). The promises of freedom and happiness held out by America's founding myth, Noland argues, have long openly sanctioned social violence.(1) Today, however, the self-perception of American society either represses or glorifies violence. The culture of liberal capitalism has surrounded itself with a sphere of moral principles that, suggesting social harmony, in fact cunningly conceals repression and exploitation. Noland's analysis culminated in the memorable image comparing American culture today to the actions of a psychopath.(2) Incapable of empathy like the psychopath, she argues, American culture organizes a fundamental fraud that turns the hopes, fears, and worries of others into instruments serving the satisfaction of its own drives, while camouflaging its exploitative aims. To draw secret profit from the weaknesses of other people, Noland claims, has become a cultural norm.

A norm which Sierra sabotages. Where his work seems to profit from the weaknesses of others, it exhibits—publicly and without any recourse to moral principles—the very techniques of social repression Noland saw as veiled. He has eighty-nine Mexican Huicholes photographed from behind as though to reconfirm their displacement from their native territory (2009). The (bad) teeth of the last Roma of Naples are documented like the dentition of a horse whose residual value is to be determined (2009). A war veteran mortified by guilt complexes stands in one corner of our gallery for his usual small wage (2011). Sierra neither makes any apologies for the violence humans inflict on other humans, nor does he criticize it. He brings it to the field of art, exhibits it, allowing its victims to step out from the shadow of moralistic denial and idealization. His work demands that we recognize the feelings and acknowledge the (defeated) struggles of those people our own economic and political systems put in the very shameful situation Sierra presents to us as such. Yet he refuses to grant his audience the absolution of a critical art that, striking a progressive pose, denounces repressive conditions without actually changing them. He thus also disrupts the art scene's self-deluding belief that it occupies a place exempt from these conditions.

In the gallery's courtyard, we are showing one stage of Sierra’s most recent project, Destroyed Word. Workers erect and then destroy individual letters on various sites around the world. The destruction of the Berlin T will take place on May 1 at 2 pm.

The exhibition was curated by Alexander Koch and Nikolaus Oberhuber. It has been produced in collaboration with Wilhelm Schürmann and displays several central pieces from Gaby and Wilhelm Schürmann's extensive collection of works by Cady Noland.