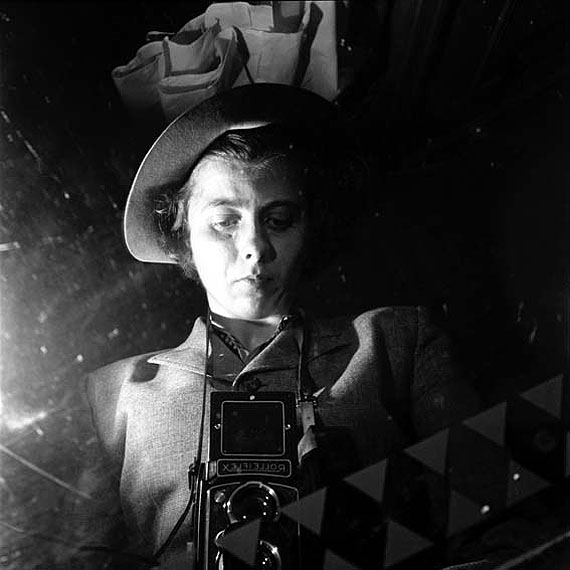 Between January 27 and April 28, 2011, Hilaneh von Kories Gallery in Hamburg is going to show “Twinkle, twinkle, little star”, an exhibit of more than eighty images by Vivian Maier from the 50’s and 60’s. Maier, who in her life time did not publish any of her pictures, has been recently discovered as an enormously talented “street photography” artist who saw the world through the lenses of a Rolleiflex camera and captured hundreds of thousands of telling moments in the gritty streets and shops of Chicago and New York. The show is only the third of her work worldwide and the first in Germany.

Maier’s life was a mystery. Just like her objects are mysterious. And her methodology seems mystifying. Even more astounding is the story about how the treasure trove of images was saved from distinction. It happened in 2007 when Chicago real estate agent John Maloof bought boxes of her material at an auction where a wharehouse sold off her posessions, after Maier, who had lived with meager means and had mostly worked as a nanny and tutor of young children, no longer had the funds to pay the rent.

Maloof discovered parchment folders labeled in French, which included a total of 100,000 black-and-white negatives. He also found 20,000 slides and thou- sands of rolls of film, which had not been developed yet. It took him many months to sift through and evaluate the bounty, a vivid testament to Maier’s keen eye for city folks on a stroll, housevives and shopkeepers, poor and rich and for, most of all, children of all ages playing in the streets.

The collection of her images hints that Maier felt particularly close to children whose pictures she took in spontaneous ways, while focusing on relevant details and the overall composition of her images. Decades later, viewers are not only privileged to get an idea on how fascinating regular people looked like in their daily routines in those days. The images also bring to light how they lived. Thus, the era when American mega cities were bustling, optimistic places, comes back to life. Maier’s subjective and artistic point of view reminds us of street photography legends such as Robert Frank, Helen Levitt, Diane Arbus and Henri Cartier-Bresson, compared to whose work Vivian Maier’s images stand up surprisingly well.

Was the accidental meeting of minds between John Maloof and Vivian Maier more than just a fluke? Time will tell, especially since he has invested enormous amounts of time and money to resurrect her work. He also started to play detective in order to learn as much as possible about the talented photographer who died, before he was able to talk to her, without next of kin.

Vivian Maier was born in New York as the only child of European immi- grants. In the early 50’s she began to work as a nanny. According to Maloof’s research she was a woman with a stubborn personality who expressed her independent streak mainly in her images. Later in life, when she fell ill and became homeless, three brothers began to support her financially, who as children had been in her care. It allowed her to stay in a small Chicago apartment.

The money, though, was never enough to pay for a dark room and for publishing her pictures. But thanks to John Maloof’s discovery and his sensible treatment of the collection they live on.