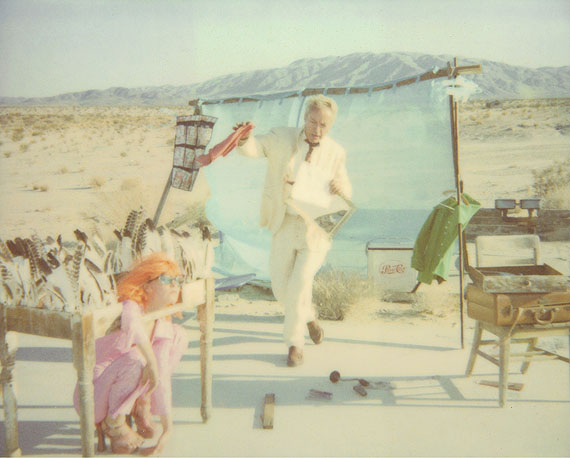 Beauty and Emotion?
Does photography today still have the permission to be beautiful and narrative, is it still or maybe even more so again allowed to be created out of emotions rather than derive from intellectually ambitious concepts? In other words: Is the concept or the basic idea allowed to hide behind the imagery?

Schneider creates her own image worlds with actors who often seem to be inextricably linked with each other in enigmatic ways. The exhibition unfolds its West Coast atmosphere by merging subject matter and colour in a magic way; with a visual play of colours that is unique to Stefanie Schneider’s photographic language.


Film director Marc Forster writes: “One meets so many characters in her pictures, many resemble images of rock formations, road signs or trademarks. It is as if these character's performances are not enactments of themselves but rather they exist as life inside pieces of graffiti. All of her endings are unstable, they spill over, they leak. They change, chameleon-like, in self-protection as we look at them. She is the desert. The desert is quiet even though everything is resounding. There is no light except for the sun. She takes a picture, she is the picture ... she looks at it and she is the star. She is the light, she is the noise. She is a true artist having to get from place to place through pure magic. An artist who exists through fragmented chunks of various stories. Her stage is never divided: Bottles crashing. Glass breaking. Cursing. Screaming. Laughing. Heads smashing. Crying. Hyperventilating. Long phone messages. Endless e- mails. Forgiving. Loving. Existing as a true friend. Her art is never divided.” (From the book Stranger than Paradise, Hatje Cantz publishers, p. 22)