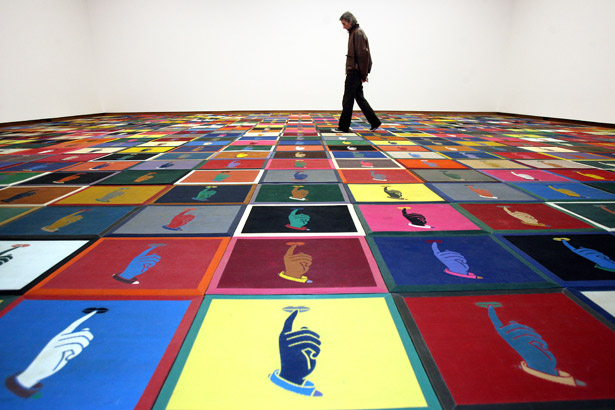 The exhibition devoted to the BACA laureate 2010: Francis Alÿs is on show until March 27th at the Bonnefantenmuseum Maastricht. The BACA (Biennial Award for Contemporary Art) is the only major award for international visual art in the Netherlands. The price is intended as a tribute to an artist for his or her adventurous oeuvre and visible influence on other (younger) artists. In 2010 the jury has decided unanimously to attribute the award to Francis Alÿs (B – 1959).

Francis Alÿs was born in Antwerp as Francis de Smedt. He studied architecture in Doornik and Venice, but eventually decided not to take up a career as an architect. In the eighties, Alÿs moved to Mexico City. He is internationally acclaimed as a visual artist, and his work has been exhibited in the LACMA, Los Angeles County Museum of Art in 2009, Schaulager Basel in 2006, Tate Modern London and Wiels Brussels in 2010, and MoMA New York later this spring. His work consists of photos, video, film and painted works on paper and canvas.

For the occasion of the BACA 2010, the Bonnefanten museum is not presenting a solo exhibition in the traditional sense. Numerous large projects are displayed and spread throughout the building. The central theme in this project is the street as a space filled with ambiguities. This means that a visit to the museum is like a real treasure hunt through the whole building, from collection presentations to the rooms where the students of the BACA Masterclass are exhibiting their work.

BACA Masterclass
"It's essentially an idea that you can't teach art, but if you're around artists you might pick up something." (John Baldessari, BACA laureate 2008)

The Bonnefantenmuseum is beneficiary of the BankGiro Loterij. Klara is the media partner of the exhibition.