The Inhabitants of Images - Rabih Mroué 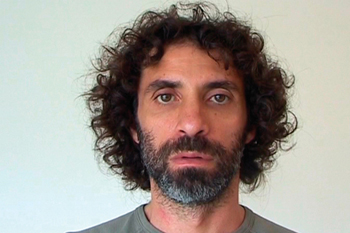 Lebanese artist Rabih Mroué creates performance-based video installations that examine the powerful influence that photographic representations exert on cultural memory, official history and personal recollection. Prefix Institute of Contemporary Art is pleased to present The Inhabitants of Images, Mroué's first solo exhibition at a public art gallery in Canada. Curated by Scott McLeod, the exhibition features several significant works that are deeply informed by the Lebanese Civil War and its aftermath, including a major new installation, Grandfather, Father and Son (2010), which is being shown in North America for the first time.

An opening reception will be held on Saturday, February 5th from 2 to 5 PM at Prefix, located at 401 Richmond Street West, Suite 124, Toronto. The exhibition, which is presented by Prefix in association with the Images Festival, continues until April 23rd, 2011. Admission is free.

The Inhabitants of Images draws its title from the artist's lecture-performance of the same name in which he offers an evocative meditation on the paradoxical feelings aroused by photographs of subjects long after they are dead. In this performance, he strives to analyze, from different perspectives, a selection of photographic images, including a poster of deceased Egyptian president Gamal Abdel Nasser and deceased Lebanese prime minister Rafik Hariri, who are shown standing together in a garden although, in actuality, they never met. This example conveys the distinct character of Mroué's work as a whole, at once grounded in lived experience and historical fact, yet inexplicable, profound, absurd.

The artist will present this critically acclaimed lecture/performance at Prefix as part of the Urban Field Speakers Series, on a date to be announced.

Included in the exhibition are four recent video installations. In I, the Undersigned (2007), the artist addresses the lack of accountability of those responsible for the Lebanese Civil War by offering his own striking apology. In Noiseless (2008), he inserts his image into newspaper clippings of missing-persons announcements, giving these notices renewed visibility. In With Soul, with Blood (2003), he scans a grainy newspaper photograph of a massive crowd at a political protest in a futile effort to find any trace of his own presence at the event. And in Grandfather, Father and Son (2010), his most ambitious installation to date, he encapsulates the tumultuous history of Lebanon in the twentieth century through three generations: from the grandfather, thousands of images of index cards from his personal library; from the father, dozens of manuscript pages from an unpublished mathematical treatise; and from Mroué himself, a deeply resonant short story published toward the end of the war in 1989. This accumulation of cultural artifacts produced over three generations becomes an investigation of knowledge, resilience, and the entanglements of the individual and the collective in the construction of historical narratives.

About the Artist
Rabih Mroué was born in 1967 in Beirut, Lebanon, where he currently lives and works. Having studied theatre at the University of Lebanon in Beirut, he began his professional career in 1990 by staging his own productions for video camera and live theatre, both separately and in combination. Today, his extensive experience as an actor, director and playwright informs his practice as a performance-based video artist, and he is widely recognized as an innovative artist of exceptional talent and depth. His work has been exhibited throughout Europe, the Middle East and Asia. Recent exhibitions include Dazibao (Montréal), BAK (Utrecht), Centre Pompidou (Paris) and Tate Modern (London), as well as the biennial exhibitions of Gwangju, Istanbul, Sharjah and Sydney. A recipient of a grant from the Foundation for Contemporary Arts (New York) in 2010, he also received the 2010 Spalding Gray Award.

About the Curator
Scott McLeod is a writer, curator and arts administrator. His work focuses on contemporary practices, with a specialization in photography, media and digital art. Since 2000, he has been the director and curator of Prefix Institute of Contemporary Art, where he also serves as the editor and publisher of Prefix Photo magazine.

About Prefix
Prefix Institute of Contemporary Art is a public art gallery and arts publishing house based in Toronto. A registered charitable organization, Prefix fosters the appreciation and understanding of contemporary photography, media and digital arts. In 2010, Prefix celebrated ten years of programming excellence.

Acknowledgements
For their support of Rabih Mroué's The Inhabitants of Images, Prefix gratefully acknowledges its Official Catering Sponsor à la Carte Kitchen and its Official Hotel Sponsor the Sutton Place Hotel. Prefix also acknowledges the support of its Presentation Partner the Images Festival and the assistance of the Toronto Arts Council and the Canada Council for the Arts.