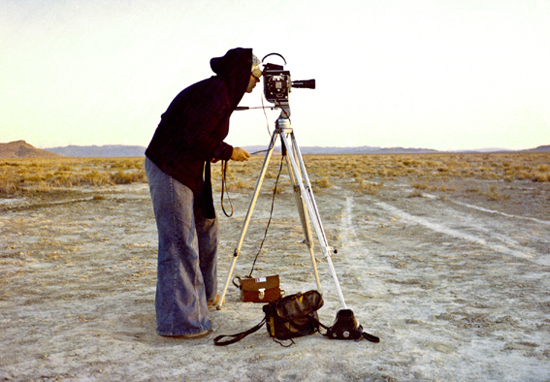 Nancy Holt in Europe! Since the late 1960s, Holt has created a far-reaching body of work, including Land art, films, photography, sculpture, site-specific installations, artist's books, and concrete poetry. Curated by Alena J. Williams, this thematic exhibition offers an in-depth look at the early projects of this important American artist whose pioneering work falls at the intersection of art, architecture, and time-based media.

Sightlines showcases Holt's transformation of the perception of the landscape through the use of different observational modes in her early films, videos, and related works from 1966 to 1980. Encompassing more than 40 works, as well as photographic and archival materials that have only recently become available, the exhibition illuminates Holt's circumvention of modernist sculptural practice and institutional spaces. Alongside a number of her significant films, including Sun Tunnels (1978), which documents the creation of her well-known site-specific work of the same name, and Pine Barrens (1975), a meditative reflection on a notoriously vast, undeveloped region in Central New Jersey, the exhibition also features such seminal collaborative videos as Boomerang (1974, with Richard Serra) and East Coast/West Coast (1969, with Robert Smithson).

Long before Holt began working in either film or video, the relationship between visual and auditory elements took on particular significance in her work. Emerging from conceptual and minimalist approaches, Holt's audio tours, sculptures, and extensive Locator series, the documentation of which is also on view, offer a novel means for observing natural phenomena and built space. On the occasion of this presentation in Karlsruhe, the artist will develop a new, site-specific audio work responding to the architecture and infrastructure of the Kunstverein.

Nancy Holt: Sightlines is based on an exhibition originated and circulated by the Miriam and Ira D. Wallach Art Gallery, Columbia University, New York. Major support for the development and presentation of the original project was provided by the Graham Foundation for Advanced Studies in the Fine Arts and the National Endowment for the Arts.