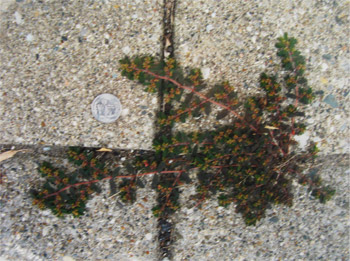 carriage trade is very pleased to present Woodward Avenue by Jef Geys, a project originally commissioned by Luis Croquer and produced at the Museum of Contemporary Art Detroit. This exhibition is a variation of Geys' Quadra Medicinale, at the Belgian Pavilion of the 53rd Venice Biennale, a collaboration of four of the artist's friends who collected and archived "urban flora" in Brussels, Moscow, Villeurbanne, and New York. For Woodward Avenue, Geys asked the ethnobotanist Ina Vandebroek to collect weeds found on 12 intersections along a thirty-mile stretch of Detroit's main thoroughfare and document their properties (medicinal, poisonous, etc.). The results were collated into a multi-layered project which incorporates photographs, text, maps, and dried plant specimens, and is accompanied by a film of Vandebroek's 2009 workshop in Bolivia, which brought together indigenous healers from the rainforest and biomedical healthcare providers from Universidad Ma yor de San Simón.

As an American city that experienced both the growth promised by the Fordist model and its gradual erosion in the global free-market system, Detroit is often associated with ruin and refashioned as myth. When government and business have "no answer" for economic insolvency, culture occasionally revels in it, offering patina as a salve for social malaise. With a refreshingly sharp wit and keen awareness of the interconnectedness of the ever-present and the overlooked, Geys' Woodward Avenue presents an idiosyncratic approach to urbanism, offering a precise archive of his subject that resists the obvious sociologies that often dictate our impressions of the city.

Part testament to the resilience of the natural world in the face of indifference and neglect, and part conceptual investigation into the complex interplay between evidence and site, Geys' examination of Detroit's main boulevard was organized and directed from his hometown in Balen, Belgium. Mapping the length of Detroit's Woodward Avenue, which stretches across the "natural" divides of socio-economic zones from Cadillac Square in the city's center to neighboring Pontiac, the artist combined the precision of a land surveyor with an organized conceptual model that involved a great deal of chance. Specific intersections were chosen by Geys and visited by Vandebroek, who took photographs and gathered field specimens. The evidence is presented as 12 framed works, which incorporate the actual organic matter of the plants as well as their photographic representation and precise geographic location.

Operating across conventional boundaries that often limit discourse within the social, the political, and the aesthetic, Jef Geys' Woodward Avenue is guided by an intellectual curiosity that incorporates collaboration and community, with a distinct conceptual method grounded by the unambiguous reality of plant life. Linking two seemingly different places in Bolivia and Detroit, the films included in the exhibition were made by Vandebroek during her workshops and edited with detached precision by Geys. Revealing sensitivity to the utility of indigenous plants among traditional healers, which occasionally contrasts with the biomedical healthcare providers conventional practice, the films broaden the scope of the exhibition geographically, while underlining the persistent gaps in the promise of modernity routinely filled by the perennial resourcefulness of those on its margins.