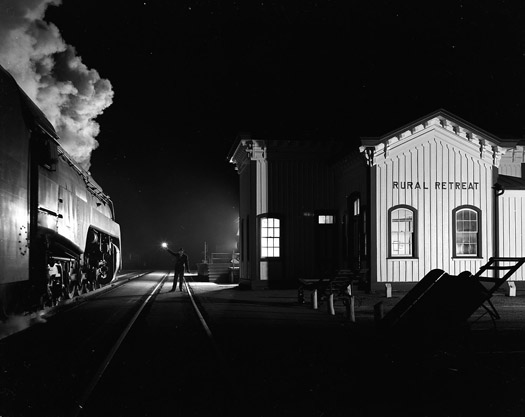 The epic historical and artistic photographs of O. Winston Link (1914-2001) celebrate the wonder of the now obsolete steam-powered locomotive. With the exhibition The Last Steam Railroad in America, Robert Mann Gallery presents a selection of classic images from Link's body of work produced in the 1950s. When the Norfolk & Western Railway began to convert its operations from steam to diesel, Link spent five years documenting the trains and the towns along the line in Virginia. A longtime hero of railfans, Link received overdue art world recognition for the prescience of his photographic vision in the decades before his death. His flare for cinematic mise-en-scène and for staging images is now acknowledged to have paved the way for the dramatic tableaux of luminaries such as Gregory Crewdson and Jeff Wall, while his interest in the socio-historical infrastructure of the railroad has inspired another vein of photographers such as Jeff Brouws and Mark Ruwedel.

A consummate craftsman, Link yielded an array of artificial lighting innovations to produce exactly the atmosphere he desired, resulting in images that are uncanny and magical. A plane, a train and some automobiles are all aspects of high-speed American imagery in the iconic Hotshot Eastbound, Iaeger, West Viginia, 1956. Here the dramatic nature of Link's production thematized by the eroticism-tinged space of the drive-in movie theater. Carefree summer nights continue for the children splashing playfully at the Hawksbill Creek Swimming Hole as a locomotive barrels by overhead. That his works have variously been described as surrealist, futurist, Norman Rockwell-ian, filmic, and (constructed) historical documents, is testament to their profound appeal as images. Indeed, for all their artful construction, his railroad photographs do not merely fetishize the sumptuous effects of smoke and light, but contextualize the trains within human narratives. Link's works brilliantly animate the iconic steam railroad as a fantastical aspect of a bygone, everyday American life. Having worked directly with the artist in the last decade of his life, Robert Mann Gallery remains the premier source for and expert on the photographs of O. Winston Link. His legacy is honored in the O. Winston Link Museum in Roanoke, Virginia.