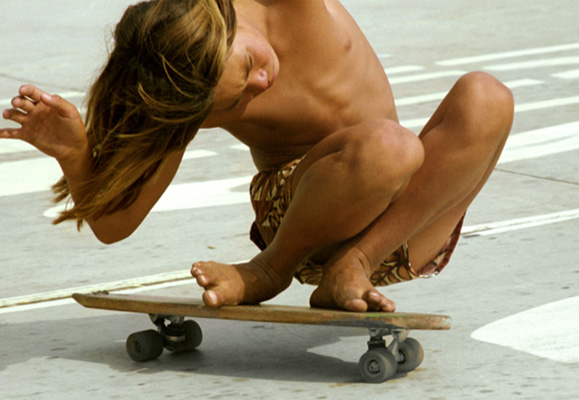 M+B is pleased to announce Locals Only, an exhibition of color photographs by Hugh Holland that capture the Los Angeles skateboard revolution during the mid-Seventies from an insider’s perspective. At the nascence of a cultural movement—before extreme sports and corporate sponsorship—Holland documented rebellious teens gliding through the drainage bowls and emptied pools around Venice, Orange County and Brentwood’s Kenter Canyon Elementary School. The opening reception for the artist on Saturday, October 23 from 6 to 8pm will include a book signing for Holland’s recently published monograph of the same name by AMMO Books. The exhibition runs from October 23 to December 5, 2010.

In the mid-Seventies, two events coincided in Southern California that gave rise to skateboarding as we now know it. The invention of the urethane wheel and the drought that emptied the pools across the city allowed the kids to ride their new boards in an entirely new way. Skateboarders, stoners, thrashers and bad-ass kids from different neighborhoods and backgrounds in Los Angeles began hitting the pavement after school and during the summer, creating a counter-culture that has inspired numerous books, songs, documentaries and films. From the flatland kids skating “freestyle” to the canyon kids going vertical and carving up drained out pools—including soon-to-be legends Stacy Peralta and Jay Adams—Hugh Holland perfectly captured their youthful innocence and the energy of the movement.

Unlike most photographers capturing the craze, Holland’s photographs were never about the sport. Holland shot with old color negative movie film, rendering his images in warm, soft tones that were in complete contrast to the sharp, crisp chromes that the majority of skate photographers were using at the time. Beyond the bodies in motion, Holland captures beautifully intimate portraits of the young boys sitting under the trees waiting their turn, resting by the chain link fence at Kenter or in peaceful contemplation after a long day of riding. Holland primarily shot his subjects in the late afternoon, bathing his models and settings with an effervescent, glistening quality. They are, in essence, photographs of a generation of boys discovering their identity amidst the backdrop of cultural phenomena that shaped a generation.

Hugh Holland (b. 1942, United States) had no formal training in photography prior to picking up a camera in 1968 after returning from a trip to Spain. He made a dark room and began shooting everything around him, particularly people. In 1975, while driving up Laurel Canyon, he witnessed his first skateboarders in the drainage ditches along the side of the canyon. For the next few years, he knew he found his subject, tirelessly documenting the burgeoning culture. Holland’s work was first exhibited at M+B in 2006. Following the success of the show, the exhibition traveled to Paris, New York and England. The artist’s forthcoming monograph Locals Only by AMMO Books is published in conjunction with his second exhibition at M+B.