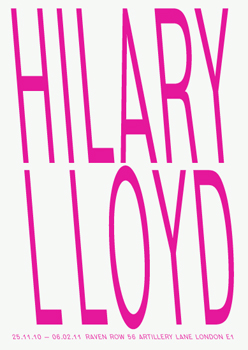 Hilary Lloyd makes images using video, slides and photography. She includes the equipment used to show these still and moving images as part of the work, which consequently inhabits space like sculpture. Lloyd has made new work for precise arrangement within Raven Row's distinctive galleries. She has been preparing for this show for over three years, watching Raven Row emerge from its construction site.

Lloyd's camera acts like her eye, and her gaze is exacting and intense. She allows her subjects to perform for the camera, even if they are inert, such as the humdrum views of foreign cities, fashion magazines and road works that are her subjects for this exhibition.

Lloyd was born in Halifax, UK, in 1964, and lives in London. This will be her first large-scale exhibition in London for ten years. Large exhibitions of her work have been held at Munich Kunstverein (2006), and Chisenhale Gallery, London (1999). She has also made solo presentations at Tramway, Glasgow, and Le Consortium, Dijon (both 2009), as well as at the two galleries which represent her, Galerie Neu, Berlin (2010 and 2007), and Sadie Coles HQ, London (2008). In 2011 she will make a solo exhibition for Artists Space, New York.