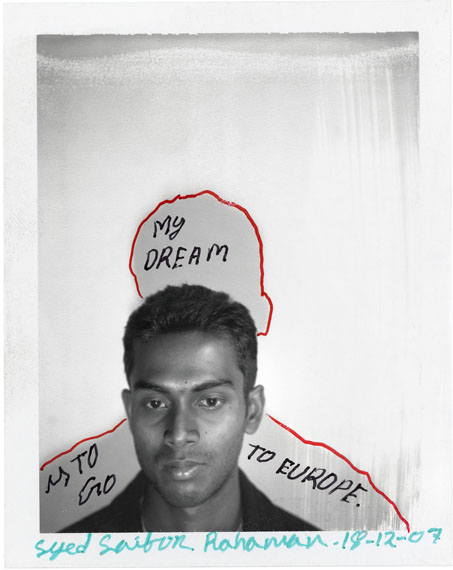 Open See is the most recent project by Magnum photographer Jim Goldberg (USA, 1953). Goldberg’s work is characterized by a strong engagement with individuals on the fringes of society. Goldberg explores complex social problems in his work and often uses text as an fundamental element within the photo. Open See documents the experiences of people who have left their homelands which were ravaged by the violence of war and severe social and economic problems in the hope of building up a better life in Europe. Here, the ‘New Europeans’, originating from Africa, Asia, Eastern Europe and the Middle East, often again have to undergo violence and cruelties, but at the same time are able to keep sight of a brighter future. The title Open See refers to the absence of borders on the open sea, in contrast to the national borders that still divide Europe despite its so-called unification.

Goldberg hones in on the many aspects of this complex story via a variety of media such as Polaroids, videos, diary fragments, objects, and medium and large-format photos. Many of the photos are written on, coloured in or scratched by the person portrayed in them. The images and words thus form a story about the people depicted that is as intimate as it is compelling. The portraits are alternated with landscape photos of the migrants’ countries of origin.