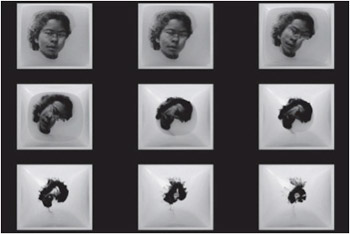 For decades the photographic process and other forms of impression have been embodied in Oscar Muñoz's practice as a metaphor to represent, in a variety of unprecedented techniques, the frustrations of the volatile image confronting the effects of time.

Muñoz has approached the act of archiving in an emancipated manner: confronting displaced data and relieving from uncertainty the lost images that somehow have managed to move within the public sphere with devastating invisibility.

A past and a present plagued with daily violent events, which are persistently repeated. Almost all of them are identical but never the same.
How can a society articulate a past when it is apparently shielded against these events, which are necessarily incorporated into everyday life to such an extent that they become almost imperceptible?

A reflection from the artist on his native country and the city of Cali in Colombia—a territory which has witnessed an extended conflict that the artist has never deserted; Muñoz prefers to speak less on the particular events that hold the powerful poetics of his work and instead, with a universal resonance, allow the transforming images to mirror, perform and depend on the elements that also deteriorated them—as does the irrevocable cycle of life.

Anarchive in this exhibition refers to the deconstruction of the authority of the archive through Muñoz's inquisitive and liberating practice. In his text Archive Fever, the French philosopher Jacques Derrida adduces on the authority self imposed by the institutionalization of data collection and how the structure of the archive doctrinally determines the content.

In a indiscriminate mode of accessing unarchived material, Oscar Muñoz has incorporated in his practice unconventional sources of data: images from extracts of obituaries printed in discredited journals, found on the marginal sections of the papers; outcast and blurred material transmitted in low rating social television announcements and other unwanted visual documents where unpronounced stories silently prevail.

The reclaimed visual data, redeemed with ingenious subtlety, reveals relevant social processes that were marginalized or over exposed to the point of anesthetizing both the individual and collective perceptions.

The institutionalized apparatus of archiving, the monuments erected and the political discourses that intend to relate to the conservation of memory are anarchically undusted and demolished by the reactivated breath of unwanted files. Anarchive evidences some of Muñoz's most evocative works that dialogue with intricate human fundamentals as poetry rises above darkness.