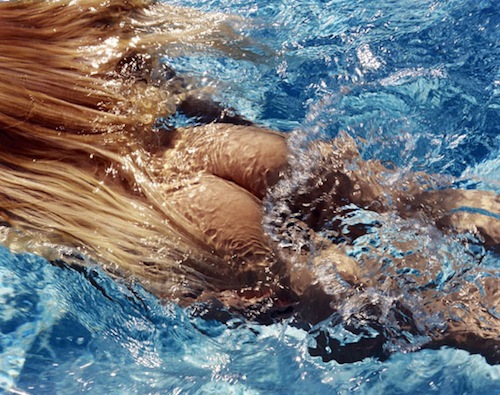 Michael Dweck’s first major photographic work was published in volume form as The End: Montauk, N.Y., in 2004, and was featured in several exhibitions and art fairs that year. The work portrays the old fishing community of Montauk and its surfing subculture. It is an evocation of a real-world paradise lost: the paradise of summer, youth, and erotic possibility, and of community and camaraderie in a perfect setting. Blending nostalgia, fantasy, and documentation the photographs present a compelling portrait of a place in time and a way of life at once fading and being reinvented.?In his follow-up to that success, in 2008, Dweck returned with his new project Mermaids. The exhibition and accompanying volume feature a dazzling array of photographs in which the photographer explores the theme of the female nude submerged in water. The simple sexy elegance and allure of these images is breathtaking. As Christopher Sweet writes in his introduction to the book: “Whether diving in the blue refractions of a swimming pool or suspended like a seraph in the cool, pellucid depths of a spring or emerging tentatively onto a rocky shore, Michael Dweck’s mermaids are lovely and aloof and bare of all raiment but for their beautiful manes and the elemental draperies that surround them. Water, light, and lens converge to capture in modern guise the elusive creature of myth.” The exhibition and accompanying book celebrate the modern mermaid, as represented by beautiful young women who appear very much at home in the water. Some of Dweck’s subjects come from Aripeka, an island fishing village on the gulf coast of Florida, and have spent much of their lives in and around the water and are capable of holding their breaths underwater for as long as five to six minutes. Photographed in Montauk and Amagansett, but mostly in the vicinity of the Weeki Wachee River in Florida, Dweck’s new work, while often abstracting the female body in a painterly swirl of watery refractions, celebrates the physical charm of the female form and the transformational effect that is achieved by the shedding of clothes and psychic baggage in the meditative isolation of the underwater world.

In Dweck’s first body of work, he drew inspiration from his teenage years spent by the beach on Long Island and captured the vanishing surf culture of Montauk. The mermaids project also has its origins in Dweck’s years on Long Island where he often went night fishing along the south shore and off Montauk. Out on the water on moonlit nights he was intrigued by the shadowy shapes of fish passing swiftly by just under the surface, and he imagined those fleeting forms to be beautiful women—the ancient allure of the mermaid.?Michael Dweck was born in Brooklyn, raised on Long Island, and studied fine arts at the Pratt Institute. From there, Dweck began his career in advertising in which he went on to become a highly regarded Creative Director receiving over 40 international awards, including the coveted Gold Lion at the Cannes International Festival in France. Two of his long-form television pieces are part of the permanent film collection of The Museum of Modern Art in New York.

Having taken up photography at an early age and used photography throughout his career, he left advertising to focus on photography full time.?Dweck's photographs were first showcased at Sotheby’s, New York, in 2003, in their first solo exhibition for a living photographer, and have been exhibited extensively at some of the world's most prestigious galleries such as Maruani & Noirhomme in Belgium, Staley-Wise Gallery in New York, Modernism is San Francisco, Eric Franck Fine Art in London, and the Blitz Gallery in Tokyo. His work is also shown at the Fahey/Klein Gallery in Los Angeles and the Robert Morat Galerie in Hamburg. His current exhibition will feature the work from Mermaids and The End and will tour galleries throughout the United States, Europe, and Asia. Michael Dweck lives in New York City.