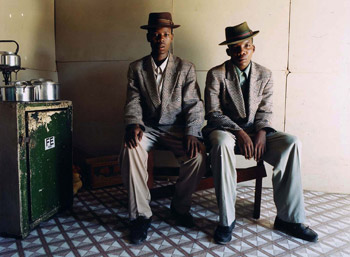 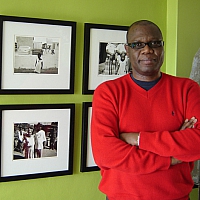 Though his photographs are documentary in nature, Mthethwa consciously works against documentary conventions. Mthethwa presumes no objectivity toward his subjects, considering portraiture a form of collaboration between sitter and photographer. Originally trained as a painter, the artist adopts several formal and aesthetic features of painting—large-scale, careful composition, rich color tones and staged poses—in his highly stylized photographs.

Together, these images offer intimate access to otherwise private space. They also reference loss and longing, particularly the voids left in rural areas when workers migrate to cities. All the works exhibit a sense of how social change and natural disasters, as well as the public's responses to them, impress upon the domestic sphere. Organized by Associate Curator Naomi Beckwith, Zwelethu Mthethwa: Inner Views continues the Studio Museum's commitment to the presentation of contemporary work by international artists of African descent.

Usable Pasts 2009-10 Artists in Residence: Mequitta Ahuja, Lauren Kelley and Valerie Piraino In this year's installment of the much-anticipated Artist-in-Residence exhibition, Mequitta Ahuja (b. 1976), Lauren Kelley (b. 1975) and Valerie Piraino (b. 1981) present diverse projects in a range of media, which together address the construction of history and memory. Ahuja makes lush paintings in which mythological warriors and demigods move between landscape, self-portraiture and abstraction; Kelley crafts stop-motion animations, photographs and sculptural installations that speak to notions of material and emotional excess; Piraino repurposes family artifacts to create installations drawing attention to the metaphorical frames that shape experience and memory. A full-color brochure with scholarly essays by Rina Banerjee, Naomi Beckwith, Pradeep Dalal and Carol Ockman accompanies the exhibition.

Inside the Collection: Interiors from the Studio Museum Inside the Collection: Interiors from the Studio Museum features an intimate selection of photographs in the Mu¬seum's holdings that focus on indoor scenes and spaces. Organized as a complement to Zwelethu Mthethwa: Inner Views, this exhibition allows glimpses into a variety of domestic spaces at different moments. The works on view range from pieces created in the early twentieth century to those made during the last five years and feature artists including Adia Millet, Frank Stewart and Carrie Mae Weems.

Hi-Res Expanding the Walls 2010 Hi-Res is this year's installment of the Museum's annual exhibition featuring the work of high school participants in the Expanding the Walls: Making Connections to Photography, History and Community program. Student photographs will be displayed along with work by quintessential Harlem photographer James VanDerZee, whose work they have studied and used as inspiration. This year celebrates both the tenth anniversary of the program and the first year using color digital photography.

Harlem Postcards Summer 2010 Represented, revered, and recognized by people around the world, Harlem is a continually expanding nexus of black culture, history and iconography. Venerable landmarks, such as the Abyssinian Baptist Church, the Apollo Theater, Hotel Theresa, Audubon Ballroom and 125th Street, remain popular emblems of important historic moments and moods. The Studio Museum's ongoing series Harlem Postcards invites contemporary artists of diverse backgrounds to reflect on Harlem as a site for artistic contemplation and production. Available free of charge in the Museum lobby, the postcards offer intimate views of and new perspectives on this famous neighborhood. This season we feature images by Sanford Biggers, Tiara Hernandez, Hew Locke and Ginger Brooks Takahashi.

About The Studio Museum in Harlem Founded in 1968, The Studio Museum in Harlem is a contemporary art museum that focuses on the work of artists of African descent locally, nationally and globally, as well as work that has been inspired and influenced by African-American culture. The Museum is committed to serving as a unique resource in the local community, and in national and international arenas, by making artworks and exhibitions concrete and personal for each viewer.

Hours and Admission (effective July 15, 2010) The Studio Museum is open Thursday and Friday, noon-9pm; Saturday, 10am-6pm; Sunday, noon-6pm. The museum is closed to the public on Monday, Tuesday, and Wednesday. Free for children 12 and under. Sundays are free at the Studio Museum, thanks to generous support from Target. The new Atrium Café is open weekends and for special events.