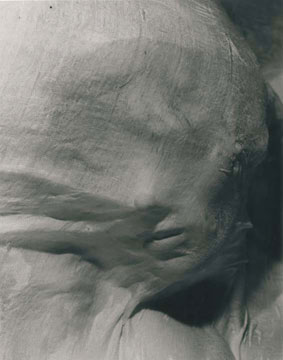 In the 1940s and 50s Erwin Blumenfeld (1897-1969) was among New York‘s most highly regarded fashion and advertising photographers. The Kunsthaus Zürich celebrated his 100th birthday in a 1997 retrospective that covered Blumenfeld‘s artistic oeuvre in great detail. The Andres Thalmann Gallery is delighted to present Blumenfeld‘s Vintage Prints from 1937 – 1958 in close cooperation with the Erwin Blumenfeld Estate.

Blumenfeld considered his nude studies an important part of his work. Inspired by Surrealist photographers, among them Man Ray and Brassaï, he explored dream worlds. The oscillation between flesh and stone, skin and plaster makes some of his nudes extremely powerful. The photographer frequently draped his models in veils to enhance a sense of eroticism and inaccessibility. His visionary stagings are characterised by strong light -contrasts, distortions and experimental development techniques such as solarisation, negative prints and multiple exposures.