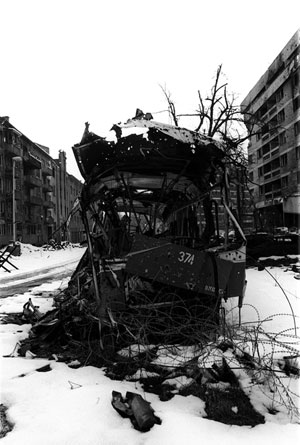 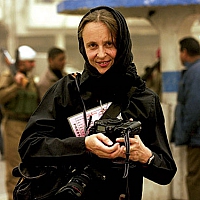 “Yugoslavia had had its time of peace and Man tipped the balance of history, according to his tradition, true to type. The rest of the world was surprised by so many atrocities. Presidents, warlords, soldiers and pillagers fiercely attempted to lay down their respective laws, while the country sank into a war that was cruel and perhaps even banal. Neither modernism nor progress nor the still-fresh memory of the Second World War could change this.

Humanity no doubt had to resign itself to its condition.

As a photographer, I witnessed events that shook former Yugoslavia. My astonishment and my curiosity increased each time I went there: so that's what war was like? I was fascinated.

Then the conflict ended and the Serbs gave the Bosnians their land back, expressing their hatred one last time by carrying out a scorched earth policy. Mirna, the Muslim, could at last go back home. Only the walls of her house remained, and as she looked at the floor strewn with litter and broken glass, she discovered that one of the Serbs who had occupied the house had used a razor blade to carefully scratch out the four faces on a family photo taken before the war showing her next to her parents and her brother.

Between trips to Bosnia, I was able to take a few days' rest in Egypt. To my stupefaction, I found myself on another battlefield – but I'd arrived 2,000 years after the event. The ruins were wonderful and this time I had no scruples about being fascinated.

The landscape fashioned by nature and archaeologists was no longer sad. The world of the Egyptians rested in peace, dignified and beautiful.

Huge stone men stood there, wounded and dismembered, all-powerful yet disfigured; others lay lifeless on the sand, their tombs desecrated and their temples robbed. As I looked at the hundreds of square kilometres of hieroglyphs carved out and erased by enemy soldiers engaged in a merciless struggle against the truth, I remembered Mirna's photo in a flash. I decided to go back along the Nile to complete my work.”

Historical events and professional obligations prevented Alexandra from returning to the Upper Nile. As she worked on her reportage pieces, she added some fragments to the work she had begun. She made a reportage on plastic surgery which gives a new face to accident victims. She took photographs of Bamiyan, where the Talibans deliberately destroyed the Great Buddha, and the ruins of Angkor entwined in the roots of ancient trees.

Cosmos Galerie presents this unfinished project. It shows a different facet of Alexandra Boulat's work, attempting, in these cold, lucid black and white images, to record the effects of blind hatred. 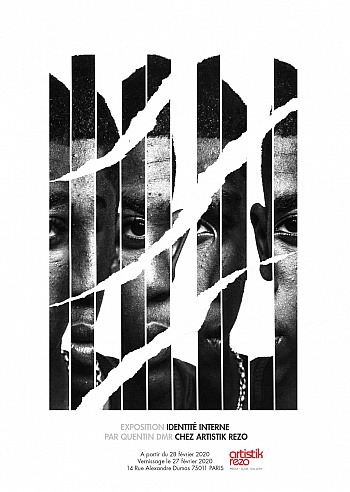