Massimo Vitali at the galerie du jour Agnès b 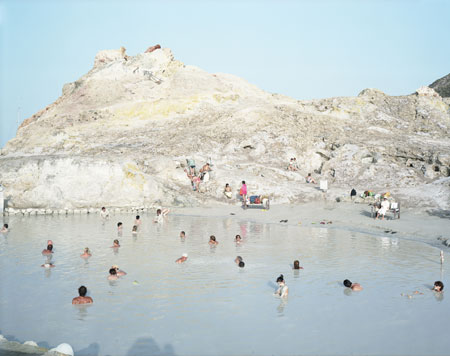 In the early Sixties, Massimo Vitali started working as a photojournalist, collaborating with magazines and agencies in Italy and Europe. It was during this time that he met Simon Guttman, the founder of the Report agency,

who was to be a key influence on Vitali as he became a “Concerned Photographer”.

At the beginning of the Eighties, a growing mistrust in the belief that photography had an absolute capacity to reproduce the subtleties of reality led to a change in his career path. He began working as a cinematographer for television and cinema. However, his relationship with the still camera continued, and he eventually turned his attention back to photography as a means of artistic exploration.

His series of Italian beach panoramas began in the light of drastic political changes in Italy. He started to observe his fellow countrymen very carefully, depicting a “sanitized, complacent view of Italian normalities” whilst at the same time revealing “the inner conditions and disturbances of normality: its cosmetic fakery, sexual innuendo, commodified leisure, deluded sense of affluence, and rigid conformism”. (October Magazine 2006, no. 117, p. 90, How to Make Analogies in a Digital Age, by Whitney Davis).

Over the past 12 years, Vitali has developed a new approach to portraying the world, illuminating the apotheosis of the Herd, expressing and commenting through the most intriguing, palpable forms of contemporary art photography.