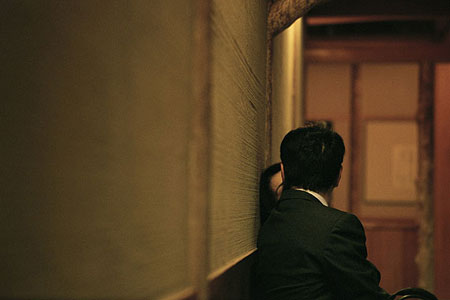 Flights 91_ 08 is a continuation of the artist's ongoing project from 1991 until 2008. During several extended stays in Japan, he devoted his work exclusively to this project. It is a story about the human condition at the turn of the twentieth and twenty-first century in a very modern reality of Japanese megalopolis.
In Japan, the essence of human dignity is inextricably linked with the cult of tradition. Tradition, understood not only as a ritual, but also a set of standards and orders, is for the contemporary Japanese man voluntarily worn armor to protect his identity and sense of individuality in the XXI century Japanese society.
Noticeable at every turn, the past and the future create a very distinct dichotomy in which one man there is like two people. (So while shooting, I ve arranged reality and I tried to capture the existing tension between these two worlds. Therefore, I deliberately chose a crowd of a million single figures and the surrounding scenery - fragments.

(2010, Wojtek Wieteska)
Of his method of work Wieteska says: In Japan the feeling of strangeness and exoticism created a distance which was inspiring for me because it suited my state of mind. This distance marked my point of view and the time and space relations I found myself in.