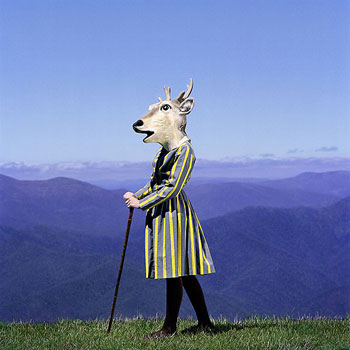 The worlds of Polixeni Papapetrou are increasingly fantastical in this new exhibition Between Worlds. To understand the influences and references in her work we must look not only to photography (Ralph Eugene Meatyard and Diane Arbus), but more pertinently to painting (in this exhibition, Caspar David Friedrich, Hans Holbein and John Whistler for example). However new anxieties about the depiction of children are one of the motivating forces behind this striking new series by an artist committed to the portrayal of the reality of children.
In Between Worlds Papapetrou has photographed children acting as animals in the landscape. The identity of her child actors is discretely hidden behind masks. This clever device elevates her characters to participants in an absurdist drama, which is both recognisable and surprising. There is a challenging confusion between fantasy, mythology, archetype, animism and theatricality.
In Papapetrou’s work there is identification with the world of children that is rare and remarkable. She sees children themselves as ‘between worlds’, between infancy and adulthood. Yet she does more than identify, creating fantastical worlds that only adults can truly understand and relate to. The landscape is ever present as a backdrop and it varies from cultivated, even manicured (The Debutants) to Australian bush (The Pastoralist and The Digger), to European mountainscape (The Wanderer) and coastal seascape (The Reader and The Ambassadors).
The animals portrayed are as varied as the landscape. In The Harvesters three pink pigs in coordinated pink dresses are gathering hay as they pose for the camera. There are horses, goats, dogs, a cockatoo, rabbits, penguins and an owl. In The Caretaker a gorilla sits on a chair holding a formidable bunch of keys next to a spectacular grasstree. The most surprising element in this image is the pink fleshy human hands that extend from a fully frocked black garment.

These images are striking, disturbing and memorable. They have a psychic power over the imagination. They draw on the postures and affectations of culture and make them appear humorous and serious in equal measure.