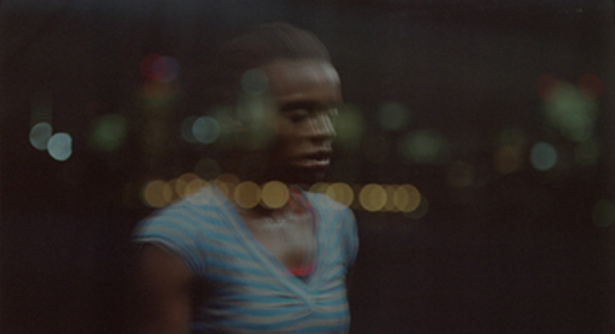 Knut Åsdam's exhibition at Bergen Kunsthall is structured around three projects that deal with specific geographical areas. With different approaches – in two new films and in a photographic project – the exhibition revolves around the sections within the cities London, Tripoli and Oslo. The exhibition is built up as an architectural installation where the boundaries between inside and outside, between exhibition architecture and artwork, and between the universe of the films and the physical surroundings of the viewers merge with one another.

Abyss was filmed in various locations in East London, at the Thames Gateway and on the outskirts of the area where the Olympic Arena is being constructed. The film portrays an urban reality that is affected in a variety of ways by migration, in the sense of both the movements of human beings and the flow of money and power, and at the same time of a migration that takes place at another level – in the imagination.

Tripoli emphasizes political history and architectural traces through the preserved relics of our recent past. In Tripoli in North Lebanon one finds the remains of one of the world's most distinctive and ambitious construction projects, a stranded vision in the form of an international market place designed by the Brazilian architect Oscar Niemeyer in 1966. On the outbreak of the civil war in Lebanon in 1975 all the work on the extensive project ceased, and the buildings were never completed. The film is part architectural documentary and part theatrical drama hence Tripoli attempts to leave space in the film for a story of violence and the uncanny.

In addition to the two new film projects the exhibition presents the photo project Oslo, Grorud 1, where Groruddalen in Oslo constitutes the photographic and thematic raw material. The photographs have subjects that are closely related to the themes dealt with in the two film works in the exhibition, but focuses more on details of the everyday. Once more it is a geographically specific area that forms the point of departure – with a number of implications that can be viewed both in relation to and in contrast with Tripoli and London (Abyss).