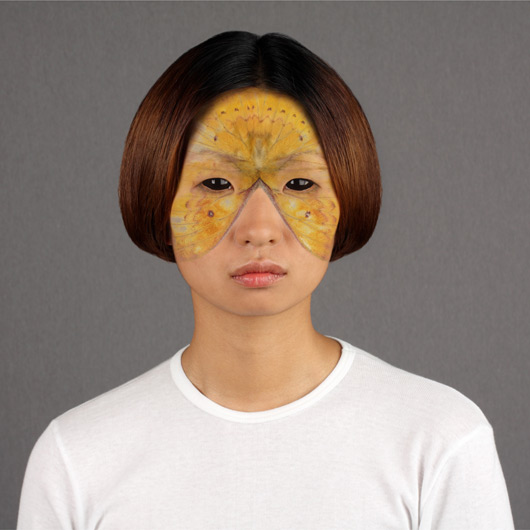 The artist Owen Leong has seen the miraculous Bogong and fallen under its spell, perceiving in its tawny wings the substance of a sumptuous guise. His concern, being the product of his Asian-Australian heritage, is integration within Australia, and therefore aligns itself quite naturally with the invasive migratory moth. For sadly, though we might be loathe to admit it, the spectre of the 'yellow peril' that species so derisively invoked in parliament, is hoisted even today on the national flagpole, rattling the pale-skinned locals as a means of capturing political allegiance.

Owen Leong's subjects, young people of Asian descent, who appear so mysteriously in his photographs, are all marked with the effigy of this and other bark-hued moths, the wings of the creatures poised across their brows like masks at the Venetian Carnivale, that wonderful nocturnal ritual where indeed the brightest butterflies go to play. The subjects however are not so old as to be fully fledged themselves; rather the vestige of their pupation is not quite in abeyance, 'adulescent' to use a modern term. Unsettled creatures all, they are not considered endemic, their disguises don't quite work and their lack of personal ease, telling. They are however sexy, beautiful and ever so slightly androgynous. And were they to invoke the mythology of their ancestry they would see that their preferred symbol of choice is not one of integration but a thing that marks them clearly as other. In the legendary dream of Lao Tzu, the sage perceives himself as a butterfly, but once awakened wonders if in fact he is a butterfly dreaming himself a man. To pose such a question, not least of all in a time of social conservatism, delineated the scholar as one whose own identity was poised on the cusp of dissolution.

Fastidiously researched and executed, there is little about these works that is left simply to fate. The models are carefully selected, the lighting and poise just so. Finally the digital post- production occurs with absolute attention to detail, this being the moment where those hallmark wings and imperious, obsidian eyes, devilish dark and sinister, take form. Were I to name other Australian artists whose practices likewise explore gender, ethnicity and identity, then Christian Thompson, Kate Beynon and David Rosetzky would be there. Owen Leong is somewhat younger but already his work is clearly conceived and completed, so much so one readily expects to see him, in the not too distant future, included in major thematic shows; his exploration of the moth as signifier but one of the notable facets therein.

But for creatures of such tiny stature, so weighty a symbolic burden seems an unreasonably arduous load - an invader for one, sustenance for another, liberator of spirit for others yet again. No wonder its time on earth is brief. But while the life of a moth may be short, its capacity for self replication is quite notably fecund. This indeed is what the demographers of Canberra will tell us too of our own new arrivals. According to their reckoning, individuals such as those depicted in Leong's current series are the ones most likely to parent the Australia that is yet to be, soon to rise in number just as the old guard are set inevitably to dwindle. How ironic then that the artist's added concern, at least as far as these works go, is one of sexual preference. As an upshot of personal experience and by way of advancing 'queer' discourse, he asks us also to consider where people such as these - be they straight, gay, bi, lesbian or trans- gender, or simply by self nomination 'Australian' might find their footing in the world today. Naturally, one might hope, their lives will not be so butterfly brief or their foray into public life as fleeting as a nightly migration. If anything what is posed by these elegant photographic specimens are the perennial questions of youth, where identity is a right of passage and the ego a thing with which to be reckoned. Nowadays however, the constitutions of self are many and the modes of identity as passing as an amorous moth on the make. What haunt these images however, the likes of which are singular solid statements, are in fact the shadows of the many permutations they imply. In this they are lucid yet fragile documents and mirror for us just how tenuous and undefinable identity nowadays has become.